Where Can You Find The Bachchans, Priyanka Chopra And Others On New Year's Eve 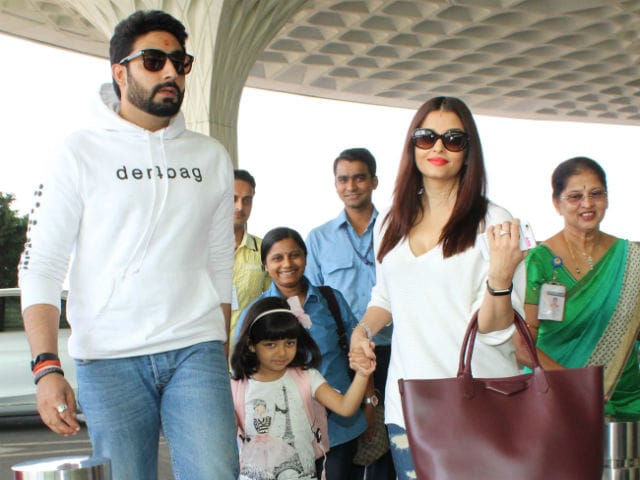 New Delhi: 2016 has been a rather busy year for Bollywood with films like Sultan, Rustom, Fan, Udta Punjab and Ae Dil Hai Mushkil bombarding the box office. 2016 was well rounded off with Aamir Khan's much-anticipated Dangal, which opened to terrific reviews and impressive box office numbers. Aamir Khan, who began smoking and appeared very, very nervous, is celebrating his anniversary week at the hill station of Panchgani outside Mumbai along with his movie's team. Aamir and wife Kiran Rao are already hanging out with sons - Junaid and Azad and friends from Bollywood - will expectedly spend New Years in the hill station. Meanwhile, the littlest Bachchan - Aaradhya will ring in New Years with star parents Abhishek and Aishwarya Rai Bachchan in Dubai and later, will reportedly take off for a vacation in USA.

The Bachchans have reached destination Dubai, and Abhishek Instagrammed a very misty picture of the resort they are staying at. Winter feels.

Meanwhile, Amitabh Bachchan set off for a "blissful" New Year in the hills of Rishikesh:


Priyanka Chopra, who is rocking the West with her TV show Quantico, is back home for the holidays. Talking to news agency PTI, she said that she will let her hair down in Goa with friends and family on New Year's eve. "My plan for New Year's Eve is to hang out with my friends and family. I'm going to be in Goa, India because I have a home there. So I intend to be awake into the wee hours of the night," Priyanka told PTI. The Bajirao Mastani actress' stay in India will prove to be a fruitful one for Bollywood. Priyanka said that while in India, she will zero in on her next Bollywood projects. She told PTI: "I will be doing two Bollywood films next year. I have come to India to decide on those films. By the end of January, I will finalise which those films will be."

Celeb couple Twinkle Khanna and Akshay Kumar are already vacationing in Cape Town and will herald the New Year in the African port city. It was also Twinkle's 43rd birthday on December 29.

I am lucky to share a birthday with my father-a bittersweet day now -friends and family, some wine and cheese and of course dad's favourite creme brûlée #salut

Two celebrities, who we know for sure are going to be in Mumbai, are new parents Saif Ali Khan and wife Kareena Kapoor - they welcomed their first baby on December 20. The new parents will celebrate New Years with a house party, along with their son, reported IANS. Kareena and Saif have named their baby Taimur Ali Khan Pataudi.

Actress Anushka Sharma and boyfriend Virat Kohli are tucked away safely in the hill station of Dehradun. Earlier this week, Anushka and Virat made headlines after a picture of the two with a priest was shared on social media. Virat dismissed reports of Virat and Anushka's rumoured engagement in strongly worded tweets on Friday.

Hrithik Roshan and ex-wife Sussanne Khan had a reunion of sorts when they took off for Dubai with children - Hrehaan and Hridhaan earlier this week. Hrithik and Sussanne, who divorced in 2014, are sharing envy-inducing pictures on Instagram.

Meanwhile, Alia Bhatt is vacationing in an undisclosed location and sharing brilliant pictures on Instagram. Rumours are rife that Alia is accompanied by her rumoured boyfriend, actor Sidharth Malhotra.

Actor Anil Kapoor is in Paris with wife Sunita and children - actors Harshvardhan and Sonam. Earlier, Anil shared pictures from his birthday party in London on Christmas eve.

An Evening In Paris

Nargis Fakhri was enjoying herself in the beaches of San Pedro, Los Angeles and is now back home at Hollywood Hills. Her Instagram pictures will make you take a day off and be a couch potato.

Back home and back to business. Just trying to relax after relaxing. Need to prep this face for New Years Eve!

Actress Malaika Arora Khan, who separated with Arbaaz Khan earlier this year, has already hit Goa with her girlfriends.

Sunsets in Goa with the girls

Actor Sanjay Dutt plans to fly out of India to celebrate the New Year with his family - wife Maanyata and twins Iqra and Shahraan, said PTI. This year, Sanjay Dutt walked out of Pune's Yerwada Jail as a free man, after serving a five-year sentence in the 1993 Mumbai serial bomb blasts case.

Meanwhile, Jacqueline Fernandez is sharing pictures from her 'year-ending' holiday in France.

the snow reminds me of the beauty and mystery of creation, of the essential joy that is life... #orhanpamuk #courchevel1850 #yearendtrip

Radhika Apte, who is presently in London, will spend New Years with her husband, musician Benedict Taylor, reported PTI. However, it will be a working January 1 for Kaabil actress Yami Gautam. Her film with Hrithik Roshan releases on January 25.

Meanwhile, South stars like Prabhas and Samantha have contrasting plans for New Years. Prabhas will work through the New Year weekend while Samantha will let her hair down in Goa. "For every New Year, Goa has almost become a sentiment for me! This time will be my 3rd year there. I'll be ringing in 2017 in Goa with my close friends and family," iflickz quoted Samantha as saying. Prabhas' Baahubali: The Conclusion will hit screens on April 28.

Promoted
Listen to the latest songs, only on JioSaavn.com
TV stars Divyanka Tripathi and husband Vivek Dahiya have been warming up to welcome the New Year in Paris.

A photo posted by Divyanka Tripathi Dahiya (@divyankatripathidahiya) on Dec 29, 2016 at 5:00pm PST

A very happy New Year to you too!