Sara said, "I went to the restroom with my phone, and I told my mother, 'Mom, I know that we should be thankful for these opportunities, but..." 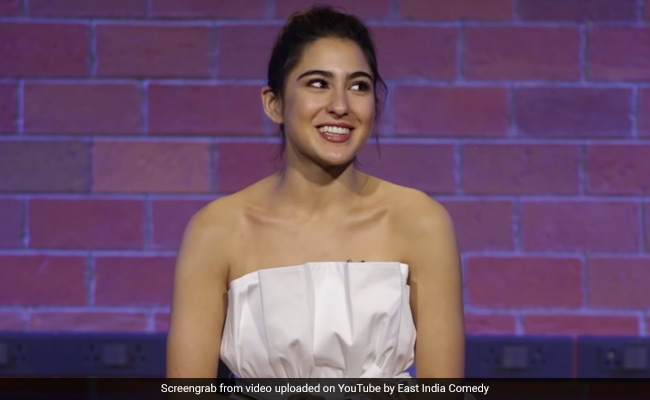 Sara Ali Khan in a still from the interview. (courtesy: YouTube)

Sara Ali Khan, who recently featured in Imtiaz Ali's Love Aaj Kal, revealed that she wanted to "pretend to have a cardiac arrest" in order to skip a movie narration in an interview with East India Comedy. In the web talk show 'EIC vs Bollywood,' which featured four comedians along with Sara Ali Khan, questioned her about the number of narrations she has heard till date. She giggled and answered, "Well, five worthy of remembering, because I am doing five films." Sara Ali Khan has featured in three films and has two projects in line. Talking about a "weird, funny narration," Sara said, "There was this one time," she paused, sighed and added, "I'm not going to say much, because he said so much." The 24-year-old actress disclosed that the narrator was a man and said, "That's all, those are the only leads."

Narrating the incident, Sara Ali Khan said, "I went to the restroom with my phone, three hours in, and I told my mother (Amrita Singh), 'Mom, I know that we are all professional and we should be thankful for these opportunities and thank god and wow, I'm a good girl, but can I pretend to have a cardiac arrest? Is that allowed?' She said 'no, you cannot' so I said, 'Should I faint? Should I throw up? What do I do? Can you say something?' and then she told me that I have to go back with professionalism and continue till the end."

Sara added, "Anyways, five and a half hours later, I'm at my home, and I told my mother, 'I really just hate you, I don't want to talk, I don't want to hear anything. I just want to sleep.'" The Kedarnath actress did not reveal the name of the director or if that particular film went on floors or not.

Sara Ali Khan, who made her debut in Bollywood with 2018 film Kedarnath, has featured in two more films - Simmba andLove Aaj Kal. She will now be seen in Coolie No 1 starring opposite Varun Dhawan. The actress also has Aanand L Rai's Atrangi Re, co-starring Akshay Kumar and Dhanush, in the pipeline.