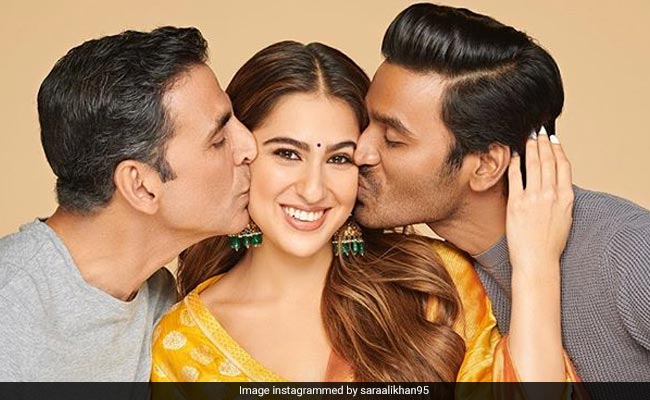 Akshay Kumar will be starring alongside Sara Ali Khan and South star Dhanush in new film Atrangi Re. The film is being directed by Aanand L Rai. Akshay Kumar will be sharing screen space with Sara Ali Khan and Dhanush for the first time. The 52-year-old actor will star in a "special role," the makers told news agency PTI in an interview. Filmmaker Aanand L Rai was quoted as saying, "It takes a secure actor like Akshay to do such a role. He has been pushing the envelope and is always up for challenges." The Kesari actor in the interview said, "When he narrated the film to me I said yes to it within ten minutes."

In the interview, Akshay Kumar added, "I am thrilled to be working with Aanand L Rai, I have always admired the way he has showcased his stories." On working with Sara and Dhanush for the first time, the 52-year-old actor said, "My combination with Sara and Dhanush truly makes it true to its title - Atrangi!" Meanwhile, filmmaker Aanand L Rai, on casting Sara opposite Dhanush, was quoted saying, "Their pairing is quite interesting and exciting. Fans will love the freshness these two will bring on the big screen."

The movie also brings back Dhanush with Aanand L Rai after the hit film Raanjhanaa.

The Love Aaj Kal actress wrote, "Blessed to be working with Aanand L Rai sir, in an AR Rahman musical. And so thankful to have Akshay Kumar sir join hands with the extremely talented and incredibly humble Dhanush and myself."

Sara Ali Khan also revealed the release date of Atrangi Re with the pictures she shared. The 24-year-old actress disclosed the big day saying, "Cannot wait to come again, on Valentine's Day, February 14, 2021." Her upcoming film Love Aaj Kal is also scheduled to release on the same date this year. With excitement, the actress wrote, "Cannot wait to start."

These photos are the cutest thing you'll see today:

I can't believe my luck My next film : ATRANGI RE Blessed to be working with @aanandlrai sir In an @arrahman musical And so thankful to have @akshaykumar sir join hands with the extremely talented and incredibly humble @dhanushkraja and myself Presented by @itsbhushankumar's @TSeries, @cypplofficial & #capeofgoodfilms And written by Himanshu Sharma Sir CANNOT WAIT TO START And cannot wait to come Again, on Valentine's Day 14th February 2021

Atrangi Re is being jointly presented by T Series, Colour Yellow Productions and Cape Of Good Films. The film is written by National Award winner Himanshu Sharma. Atrangi Re will go on floors from March 1, as reported by PTI.