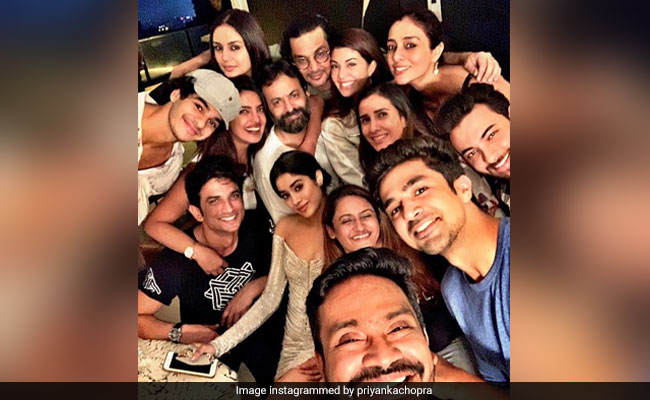 Priyanka Chopra was in town, folks, and that called for celebration. The 36-year-old actress partied with actors Janhvi Kapoor, Sushant Singh Rajput, Tabu, Jacqueline Fernandez, Ishaan Khatter, Aayush Sharma and Huma Qureshi, filmmaker Tarun Mansukhani, celebrity manager Rohini Iyer and casting director Mukesh Chhabra, among others. Priyanka shared glimpses from Sunday night's get-together on Instagram and wrote: "Lovely night with lovely people. Thanks, Rohini Iyer (the host of the party) that was so fun." Jacqueline also shared a fun picture of herself with Priyanka and captioned it: "Never have I been so inspired by a person!! Priyanka Chopra, you made me stay way past my bedtime but you're right... It's only sleep yaa." On the post, Priyanka replied: "Was good to see you baby. Thank you for the kind words! Bedtime is for the weak. Lol!"

Lovely night with lovely people. Thx @rohiniyer that was so fun!

Never have I been so inspired by a person!! @priyankachopra you made me stay way past my bedtime but you're right.. it's only sleep yaa!! #peptalkPC thanks @rohiniyer for making me part of the impromptu gang!

She is a force of nature .. I am and always will be soooo inspired by @priyankachopra Such an epic night , great conversations ...chatted till the sun came up .. Danke for being you #love #her Seen here teaching me some poses Thank you @rohiniyer such a faab impromptu plan

A day after the party, Priyanka took off to the US, where she lives with her husband Nick Jonas. Recently, Priyanka featured in the music video of Sucker, the Jonas Brothers' reunion track. Sucker currently occupies the top spot on Billboard Hot 100 list.

The Jonas Brothers debut at No. 1 on Billboard Hot 100!! OMGeeeeeee!! I Could not be more proud of you guys (screaming inside) @nickjonas@kevinjonas@joejonas
https://t.co/MqjT5Kkv7G

Priyanka Chopra arrived in India last month in time for her brother Siddharth's roka ceremony. A few days after the roka, Nick Jonas returned to the US to continue the promotion of Sucker with his brothers Kevin and Joe. On the other hand, Priyanka travelled to the Havelock Island in Andaman to resume filming The Sky Is Pink, directed by Shonali Bose. The film also features Farhan Akhtar and Zaira Wasim. Priyanka is co-producing The Sky Is Pink with Siddharth Roy Kapur.