For Priyanka Chopra, Farhan Akhtar And Zaira Wasim, The Sky Is Pink In Andaman

Priyanka Chopra, along with her The Sky Is Pink co-stars Farhan Akhtar, Zaira Wasim and Rohit Saraf, has checked in to Andaman for the shoot 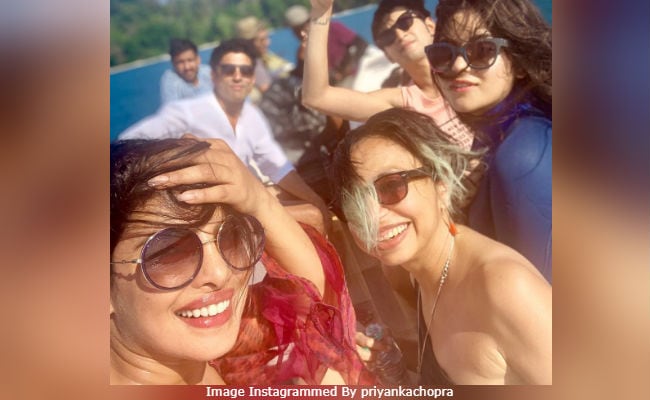 Priyanka Chopra has finally resumed shooting for her upcoming film The Sky Is Pink. Priyanka and her co-stars Farhan Akhtar, Zaira Wasim, Rohit Saraf and director Shonali Bose have checked in to Andaman for the shoot. "Our sky is pink," Priyanka captioned her post, which she shared from the film's sets. The picture appears to be taken on a boat. Farhan also posted the same photo as Priyanka and updated his Instafam with their current location and wrote," Sun, surf, sand, selfie..." The selfie has been taken by Priyanka, who is seated beside Shonali Bose while Farhan, Zaira and Rohit pose behind them. Take a look at the photo here.

Farhan shared this picture of himself later.

Here's how Priyanka, Farhan and Rohit are chilling in Andaman.

The Sky Is Pink is reportedly based on Aisha Chaudhary, a motivational speaker. She was diagnosed with pulmonary fibrosis at the age of 13. In the film, Priyanka and Farhan play the role of Zaira Wasim's parents.

Priyanka shot a portion of the film before her wedding to Nick Jonas in December. The Sky Is Pink rolled out in London last August and then, the team moved to New Delhi.

The Sky Is Pink will be Priyanka Chopra's first Hindi film in three years. She had announced her association with the project on social media and wrote, "I'm so excited and happy. Some stories just need to be told. In the spirit of Aisha Chaudhary and her incredible parents Aditi and Niren, we bring you our tentatively titled super special project The Sky Is Pink."

I'm so excited and happy about today..Some stories just need to be told. In the spirit of Aisha Chaudhary and her incredible parents Aditi and Niren we bring you our tentatively titled super special project The Sky is pink. Going on floors today. God Speed. @rsvpmovies @roykapurfilms @faroutakhtar @shonalibose_ @zairawasim_