When Karan Johar And Aditya Chopra Had Warned Aamir Khan Against Lagaan: "They Told Me I Was Making A Big Mistake"

"Lagaan was made at a time when people were wearing designer clothes and shooting in Switzerland. Here we were wearing a 'bandi' and speaking in Awadhi. We were breaking a lot of rules of mainstream cinema," said Aamir 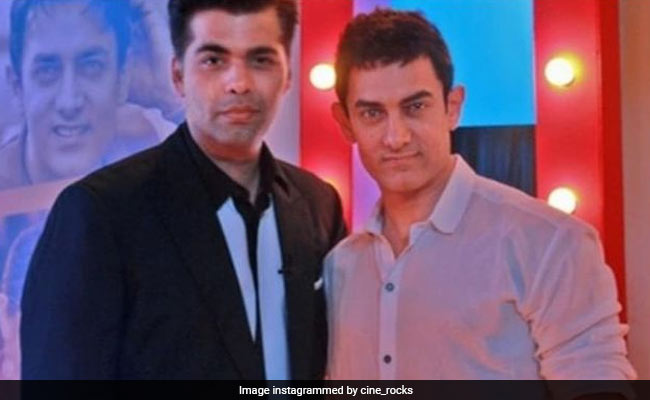 On 20 years of Lagaan, Aamir Khan revealed what his filmmaker friends Karan Johar and Aditya Chopra had said about the film before he started shooting for it. Oscar-nominated Lagaan was directed by Ashutosh Gowariker and produced by Aamir Khan, who starred as the lead actor in the film. It was shot in Gujarat in a single schedule, which was "something that had never happened before" when Ashutosh Gowariker made Lagaan. In an interview with news agency PTI, Aamir Khan revealed that he was told by Karan Johar and Aditya Chopra that he was making "a big mistake" by working on Lagaan and they also "advised him to not shoot the film in a single schedule" as it "will become a mess." However, Aamir listened to his heart and the rest is history.

"I remember I met Karan Johar and Adi (Aditya Chopra) at a party just a few days before the outdoor and they told me I was making a big mistake. They advised me to not shoot in a single schedule. They said it will become a mess but I stuck to my guts. And today both Adi and Karan are doing sync sound and single schedule," Aamir told PTI and termed his decision to act in the film and work on it a "turning point" in his life.

Lagaan is one of the most iconic films of Indian cinema. It garnered a whole lot of praise on national and international platforms - the film received an Oscar nomination in 2002 under the Best Foreign Language Film and won eight National Film Awards, including Best Choreography, Best Popular Film Providing Wholesome Entertainment, Best Music Direction, Best Audiography, Best Lyricist and Best Art Direction. It made over Rs 650 million worldwide and turned out to be the third highest-grossing Hindi film of 2001 after Karan Johar's Kabhi Khushi Kabhie Gham... and Sunny Deol's Gadar: Ek Prem Katha.

Lagaan, which is set in the pre-independence era and is about a small village in the central India, was Aamir's first film as a producer and while talking to PTI, the actor said he is glad he decided to venture into production with Lagaan as it helped him to take decisions like employing the then-latest sync-sound recording and also introducing the first assistant director system.

It's not like Aamir Khan said yes to Lagaan right after Ashutosh Gowariker narrated him the script. The actor was in doubt too and he had his reasons - the film broke many rules in its time and was a lot different than other Bollywood films back in the Nineties. It was set against cricket and had a runtime of nearly four hours. "Ashutosh narrated the story to me and I really liked it but I thought, 'This is too complex a film, I'm not getting into this.' Ashutosh went around the industry with the script and every six months, I would hear about it. I'm talking about the year 1997-98, when he was still taking the script around," Aamir told PTI.

"But in the case of Lagaan... It was made at a time when people were wearing designer clothes and shooting in Switzerland. Here we were wearing a 'bandi' and 'dhoti' and speaking in Awadhi. We were breaking a lot of rules of mainstream cinema," he added.

Lagaan shows how a group of villagers, led by Bhuvan (Aamir Khan), stand against British officer Captain Russell (Paul Blackthorne) and challenge the British Army for a game of cricket to avoid the heavy tax burden.