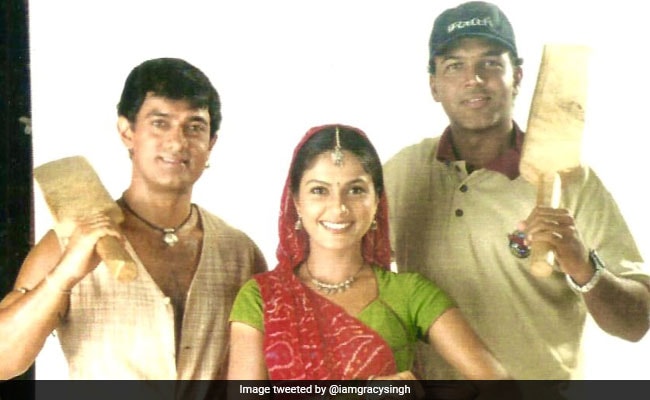 20 years ago, Gracy Singh stepped into Bollywood with Ashutosh Gowariker's 2001 film Lagaan and left us in awe with her wonderful performance. As the film clocked 20 years on Tuesday, Gracy Singh shared a set of BTS pictures from the sets of Lagaan and accompanied it with a heartwarming note. The photos feature Gracy Singh along with lead actor Aamir Khan, who also produced the film, Ashutosh Gowariker and the rest of the cast. "This is where my journey in cinema began. I stood in front of a movie camera and cherished every bit of it. 20 years since this epic released," wrote the actress in her note and added: "Immense gratitude to Ashutosh Gowariker, Aamir Khan, entire Team Lagaan."

Lagaan, set in the pre-independence era, is about a small village, whose inhabitants challenge the British Army officers to a game of cricket to avoid paying high taxes imposed on them. Gracy Singh played the role of Gauri, who stood like a rock supporting Bhuvan (Aamir Khan) and other villagers in their match against the British Army. She was applauded for her dance performances to the tracks Ghanan Ghanan and Radha Kaise Na Jale from the film.

This is where my journey in cinema began. I stood in front of a movie camera & cherished every bit of it. 20yrs since this epic released. Immense gratitude to @AshGowariker#AamirKhan ,entire TeamLagaan
THANKYOU our audience & media for all the love you showered#20YearsOfLagaanpic.twitter.com/6JvbqaC8rm

After Lagaan, Gracy Singh, who had worked in a couple of television shows before her Bollywood debut, featured in the 2002 Telugu film Santhosham. She is known for her performances in Hindi movies such as Gangaajal, Munna Bhai M.B.B.S. and Deshdrohi. She was last seen in the TV show Santoshi Maa - Sunayein Vrat Kathayein.