An Oscar-Worthy Throwback Of Aamir Khan And Others. No Lagaan Needed, Dugna Or Otherwise 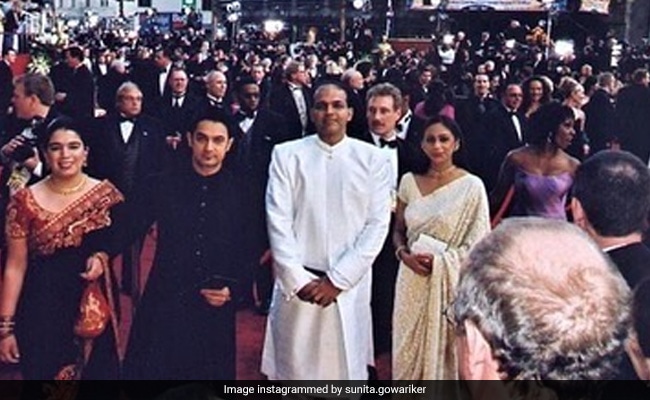 Ashutosh Gowariker's Lagaan clocked 20 years  on Tuesday and the makers decided to celebrate the big day by sharing special posts pertaining to the iconic film. Aamir Khan might be a social media recluse but thanks to producer Sunita Gowariker, we chanced upon some throwback pictures from the red carpet of the Academy Awards, where Lagaan, which earned a nomination in the Best Foreign Language Film category. The picture features the lead actor Aamir Khan along with ex-wife Reena Dutta, who was also the producer of the film. The director Ashutosh Gowariker can be seen posing with wife Sunita for the cameras. Sharing the pictures, Sunita wrote: "Seems like yesterday! 20 years of Lagaan." She added the hashtags #theacademy, #timeflies, #flashes, #blure and #losangeles to her post.

Lagaan was the last Indian film which made it to the final cut of the Oscar  nominations. Mehboob Khan's Mother India in 1958 and Mira Nair's Salaam Bombay in 1989 were also picked in the final selection in the past. But no Indian film has ever won an Oscar. Last year, Jallikattu, directed by Lijo Jose Pellissery, was India's official submission to the Oscars.

The story of Lagaan revolved around a small village where the locals were oppressed by high tax rates. The film, set in the Victorian era, was shot in Gujarat. The officers and the locals play a game of cricket as a wager to avoid taxes. Lagaan went on to become one of the biggest hits and emerged as one of the most iconic films in the history of Indian cinema.