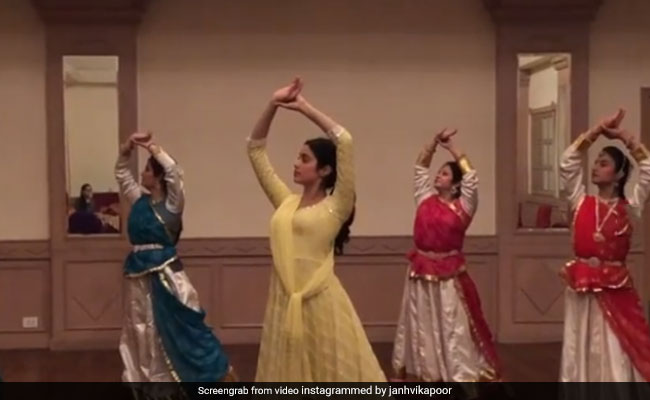 Janhvi Kapoor in a still from the video. (courtesy janhvikapoor)

Dhadak actress Janhvi Kapoor found her old phone recently and with that she chanced upon a plethora of memories in the form of throwback videos and pictures. The actress shared some of the moments on her Instagram profile on Thursday. Some photographs were taken on the sets of her debut film Dhadak, while others featured the actress with her sister Khushi and her father Boney Kapoor. We also spotted fashion designer Manish Malhotra in one of the pictures. Janhvi also posted a video in which she could be seen dancing to Madhuri Dixit's song O Re Piya from her 2007 film Aaja Nachle, which marked her comeback in Bollywood. Janhvi, dressed in a yellow Anarkali, looked stunning in the video. Sharing the chunk of memories on Instagram, Janhvi wrote: "Found my old phone, found some fun memories."

Janhvi Kapoor's love for dancing clearly needs no introduction. Here are some of the videos of Janhvi dancing. Check them out, you can thank us later.

#missing the class room. But anywhere and everywhere can be a classroom no?

Janhvi is the daughter of late actress Sridevi and film producer Boney Kapoor. Sridevi died at the age of 54 in February, 2018. Janhvi debuted in Bollywood with the 2018 film Dhadak, which performed fairly well at the box office. Janhvi's sister Khushi, who reportedly wanted to be a model, is also an aspiring actress. She flew off to New York in September, last year for higher studies.