On Sridevi And Boney Kapoor's Anniversary, A Memory Shared By Daughter Janhvi

In the monochrome photograph, Sridevi and Boney Kapoor can be seen happily posing for the camera 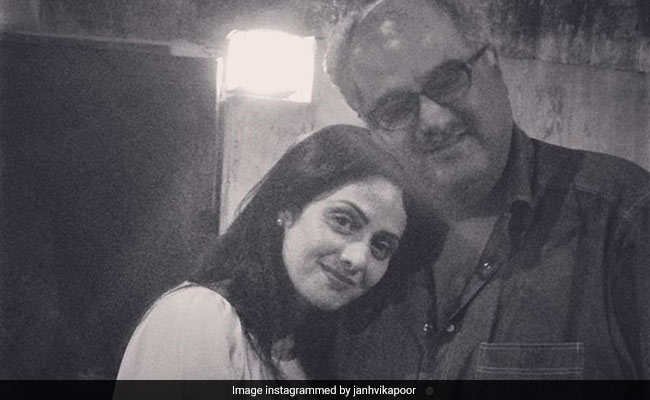 On her parents Sridevi and Boney Kapoor's 24th wedding anniversary, Janhvi Kapoor struck gold in her family photo archive and shared a priceless throwback picture of the duo. Boney Kapoor and Sridevi married on June 2 in 1996 and welcomed their daughter Janhvi the following year. Their younger daughter Khushi was born in 2000. In the monochrome photograph, Sridevi and Boney Kapoor can be seen happily posing for the camera. Needless to say, their million-dollar smiles in the old picture stole the show on the Internet. Sharing the image, Janhvi kept her wish short and sweet. She wrote: "Happy anniversary" and accompanied it with a heart emoticon. Take a look:

Sridevi died on February 22 in 2018 by accidentally drowning in a hotel bathtub in Dubai, where she was attending the wedding festivities of nephew Mohit Marwah. Her last film was MOM. She also appeared in a cameo role later in Shah Rukh Khan's Zero.

On Sridevi's death anniversary earlier this year, Janhvi shared a touching post and made us all emotional. She posted a throwback photo of herself and her mom from her childhood days and remembered Sridevi with these words: "Miss you every day."

Later on Mother's Day, the Dhadak actress posted a beautiful throwback picture with a heart emoji. In the old photo, Sridevi can be seen holding little Janhvi in her arms.

Janhvi Kapoor made her debut in Bollywood with the 2018 film Dhadak. She was last seen in Netflix's Ghost Stories, in the Zoya Akhtar-directed segment. The actress will also be seen in Karan Johar's period drama Takht, horror-comedy Roohi Afza (in which she will co-star with Rajkummar Rao), Dharma Productions' Dostana 2, co-starring Kartik Aaryan and in Gunjan Saxena: The Kargil Girl.