"I was so worried about how Waheeda ji was managing to shoot in such an extreme conditions and that too without footwear," said Amitabh Bachchan 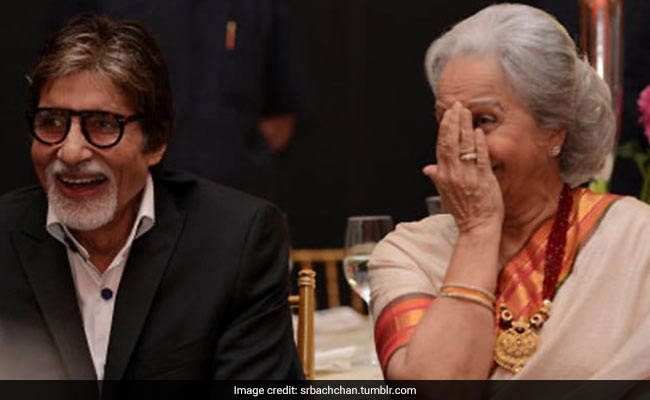 Amitabh Bachchan has a never-ending list of admirers but did you know that he is a die-hard fan of actress Waheeda Rehman? The 76-year-old actor revealed on a reality show that he considers Waheeda Rehman his "idol" and for him, she is the "most beautiful woman," reported news agency IANS. Not only this, Big B also shared an interesting anecdote from the shooting days of his 1971 film Reshma Aur Shera. He revealed that he once took Waheeda Rehman's juttis and ran towards her because she was sitting bare foot in the hot desert. "The first time I got an opportunity to work with her was in the movie Reshma Aur Shera. During the shoot, there was a sequence where Sunil Dutt and Waheeda ji had to sit bare feet in the desert, where it was impossible to stand in the sand with our shoes, because of the high temperature," said Amitabh Bachchan, when he appeared on Sony TV show Superstar Singer with Waheeda Rehman and Asha Parekh, reported IANS.

He continued: "I was so worried about how Waheeda ji was managing to shoot in such an extreme conditions and too without footwear. So, as soon as the director announced a break, without wasting time, I took Waheeda ji's juttis and ran towards her. I can't even express how special the moment is to me."

When asked who he considers his idol, Amitabh Bachchan took the name of Dilip Kumar and Waheeda Rehman and added: "Waheeda Rehman has always been the most beautiful woman to me till date. She is not only a great actor but also a great human being by her nature. For me, Waheeda ji is a perfect example of the Indian woman. Waheeda ji has given huge and incredible contribution to our Bollywood Industry which cannot be expressed through words."

Waheeda Rehman and Amitabh Bachchan have worked together in films such as Trishul, Adalat, and Namak Halaal. On the show, Big B also revealed that Waheeda Rehman has played a mother to him, his wife Jaya Bachchan, as well as, his son Abhishek Bachchan in three different films. "I would to like to share one very Interesting fact about Waheeda ji. She has worked with three members of our family and has played the role of mother with all three of us. In Phagun (1973), she played a mother to my wife (Jaya Bachchan). She was Abhishek's mother in Om Jai Jagadish (2002) and she worked with me in Trishul(1978)," he said.

To this, Waheeda Rehman giggled and replied: "It feels happy and ajeeb at the same time. If it continues this way, perhaps I will play mother or grandmother to Abhishek's kids someday!" LOL.

Big B and Waheeda Rehman were last seen together in the 2009 film Delhi 6.