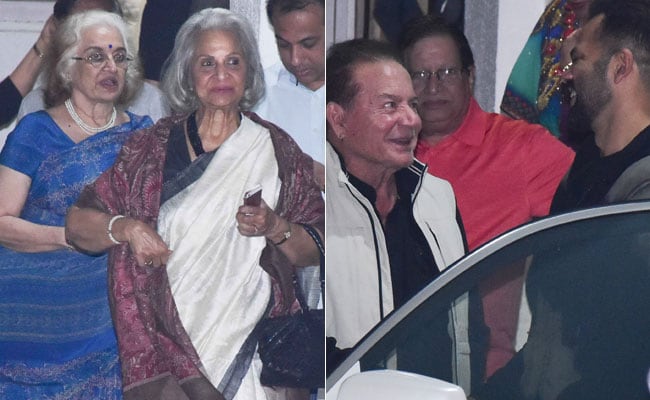 Waheeda Rehman, Asha Parekh and Salim Khan at the screening of Simmba

Take a look at the photos from Simmba screening hosted in Mumbai last night:

Simmba has become Rohit Shetty's eighth film to cross the Rs 100 crore mark, making him one of the most bankable directors of the film industry. The filmmaker holds the record for maximum films in "Rs 100 crore club" including Golmaal Again, Chennai Express, Dilwale, Singham Returns, Bol Bachchan, Singham and Golmaal 3.

Like I pointed out yesterday, #Simmba is Rohit Shetty's eighth film to cross Rs 100 cr mark... Rohit holds the record for maximum films in Rs 100 cr Club... Indeed, Rohit is making the audience laugh in theatres and his distributors laugh all the way to the bank! pic.twitter.com/KgP5H2Xgyj

Simmba opened to positive reviews from the critics as well as audience. Film critic Saibal Chatterjee in his review for NDTV gave the film 2 stars out of 5. "The cop action saga narrated by Ajay Devgn, the star of Shetty's Singham, is about a cavalier police inspector Sangram Bhalerao aka Simmba (Ranveer Singh), whose roots lie in Shivgad, Singham's hometown. But unlike the squeaky-clean older officer, Simmba thinks nothing of resorting to corrupt ways to line his pockets," he wrote.