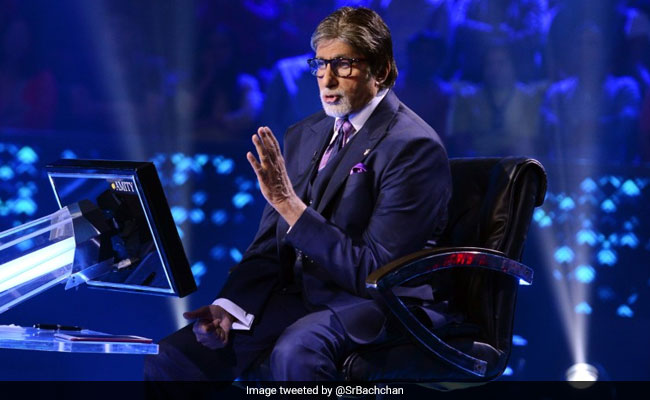 Amitabh Bachchan in a still from KBC 11. (Image courtesy: SrBachchan)

The twelfth episode of the popular quiz show Kaun Banega Crorepati 11was a perfect amalgamation of emotions and fun. In tonight's episode, Amitabh BachchAn hosted two contestants. The first player to occupy the host seat was roll over contestant Sania Chakraborty from Kolkata, with whom Big B shared his mutual love for the city and said that people from her city never fail to amaze him. Arpita Yadav from Jaipur was the second contestant to make it to the hot seat. In a segment of the show, video from the 2013 film R... Rajkumar was shown and Arpita had to identify the director based of the video. In the snippet, Shahid Kapoor says to Sonakshi Sinha, Tu sirf Amitabh Bachchan se pyaar karegi kya?" After hearing the dialogue, Mr Bachchan asked "Computer ji" to replay the video from the film and started blushing.

Arpita Yadav described herself a "special educationist." She provides education to specially-abled children. During the course of the episode, Arpita asked Big B to lead a campaign in order to to raise awareness about learning disabilities, which can lead to a social awakening. Arpita used three of her lifelines and she has earned Rs 6,40,000 as of now. She will continue playing the game in tomorrow's episode.

Anchor and journalist Sayeed Ansari was the special expert for tonight's episode. As a part of the Ask The Expert helpline, he helped Arpita Yadav when she got stuck on a question and helped her move forward in the game.