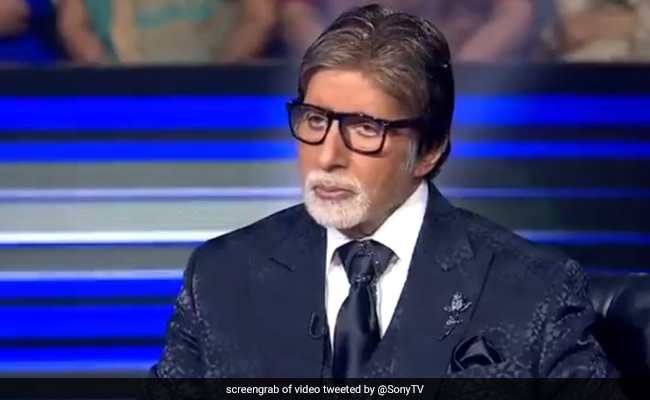 Kaun Banega Crorepati 11: Big B in a still from the show. (Image courtesy: SonyTV )

Amitabh Bachchan began a new episode and the finale week of the quiz show Kaun Banega Crorepati 11 on Monday, in a special way. Before beginning with the Fastest Fingers First round, Mr Bachchan recalled some of the moments from the season. The first contestant to make it to the hot seat, in tonight's episode was Akshay Upadhyaya, from Ghaziabad, Uttar Pradesh, who works as a tax assistant in the Directorate of Revenue Intelligence (DRI). Akshay decided to quit the game and he went home with a prize of Rs 1,60,000.

Mansi Joshi, who hails from Bengaluru, Karnataka won the second round of Fastest Fingers First. She will continue to play in tomorrow's episode. Veteran lyricist and Chairperson of the Central Board of Film Certification - Prasoon Joshi was the expert for tonight's episode, who helped the contestants who resorted to the 'Ask The Expert' helpline.

Here are some of the questions asked by Amitabh Bachchan in tonight's episode of Kaun Banega Crorepati 11:

Which of the following type of photographs are usually taken with the help of a smartphone's front camera?

Under what brand does Amazon sell its e-book readers?

Robusta and Arabica are used to prepare which of these beverages?

According to the Mahabharata, which hunter killed Sri Krishna with his arrow by mistake?

Which of these actors has not yet won the National Award for the Best Actor?