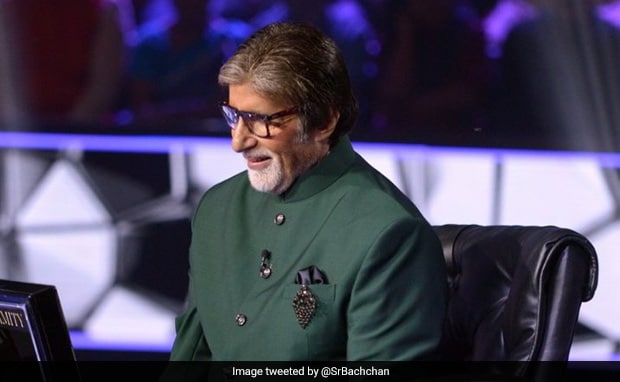 KBC 11: Amitabh Bachchan on the sets of the show. (Image courtesy: SrBachchan )

In tonight's episode of Kaun Banega Crorepati 11, host Amitabh Bachchan welcomed the roll-over contestant Ankita Kaul Ahlawat. Mrs Ahlawat is an author from Haryana. Ankit has played till Rs 2,000 in the last episode of the famous quiz show. Big B began the game with Mrs Ahlawat and asked her the first question of the episode. However, she got confused and decided to use the 'audience poll' lifeline to reach the next level. Mrs Ahlawat exhausted all of her lifelines till the 8th question and decided to quit the game. She went home with prize money of Rs 1,60,000.

During the game, when Amitabh Bachchan asked Ankita about her interest in general knowledge, she said that because of her husband and father, she developed a habit of reading about current affairs.

After Ankita quit the show, Amitabh Bachchan took the game forward with other contestants. He asked them a 'Fastest Fingers First' question, which was based on the organs of the human body.

This time, Sangeeta Chowdhury from Malda, West Bengal made it to the hot seat. Before starting the game with Sangeeta, Big B showed the contestants a video made on her life. In the clip, Sangeeta revealed that she can't speak Hindi properly and learned it from Amitabh Bachchan's movies. To this, Amitabh Bachchan said he is happy that she is learning from his films. Big B also said he thinks Sangeeta speaks good Hindi. On a lighter note, Big B and Sangeeta joked about south Indian films, where the latter said she doesn't understand the story of south films. Big B will continue the game with Sangeeta on tomorrow's episode.

Here are a few questions asked on tonight's episode of Kaun Banega Crorepati 11:

#According to the Puranas, which goddess is also known as Jaladhija and Padmalayaa?

#What is the profession of Byomkesh Bakshy, according to the title of the Dibakar Banerjee film starring Sushant Singh Rajput?

#Mithun, Simha and Kumbh are examples of what?