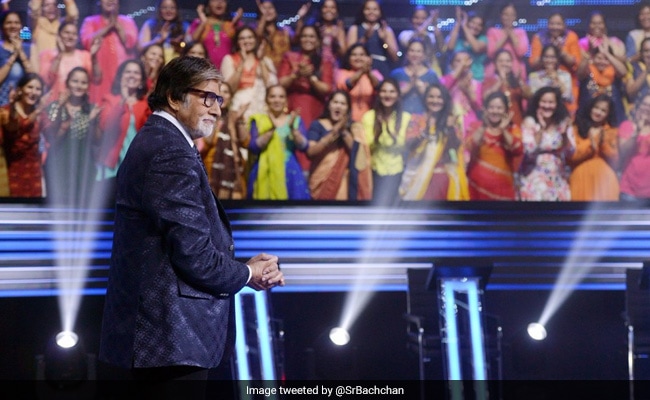 Friday night's episode of Kaun Banega Crorepati 11, started with Thursday's roll over contestant Khushboo, who started her game for the evening with the fifth question worth Rs 10,000. Khushboo also gave host Amitabh Bachchan a tutorial in Bundelkhandi language. As they resumed the game, Khushboo used her first of the four lifelines - Audience Poll - and went on to win Rs 20,000. Khushboo used her second and third lifeline (50:50 and Flip The Question) on the ninth question, which was "In 2019, who became the first-ever Indian cricketer to play 100 T20 international matches?" (The answer is Harmanpreet Kaur). She opted for entertainment category after flip the question - She was asked to guess the name of the film based on a VT.

She used her last lifeline - Ask The Expert - to get the answer for the question, "Which was these King and Poet pairs are matched incorrectly?" Khushboo went ahead with the expert's advice and won Rs 3,20,000. Khushboo quit the game on the 12 question (worth Rs 12,50,000) - "As per Valmiki Ramayana, from which tree at the Ashoka Vatika did Hanuman first speak about Lord Ram to Sita?" - and she took home with her Rs 6,40,000.

On Friday's special episode, Amitabh Bachchan hosted Dr Achyuta Samanta, who is the founder of the Kalinga Institute of Social Sciences (or KISS). He closely works with the tribal population for their upliftment. Actress Taapsee Pannu, who has co-starred with Mr Bachchan in PINK and Badla, helped Dr Samanta on his KBC 11 journey.

Achyuta Samanta and Taapsee used their first lifeline (Audience Poll) to get the answer of the question, "What is the literal meaning of the word 'kumbh' in the 'Kumbh Mela'?" The correct answer is "A Pot." Taapsee and Dr Samanta correctly answered questions like "Which building was the official residence of the first prime minister of India?" (Answer: Teen Murti Bhawan). They won a total of Rs 12,50,000.