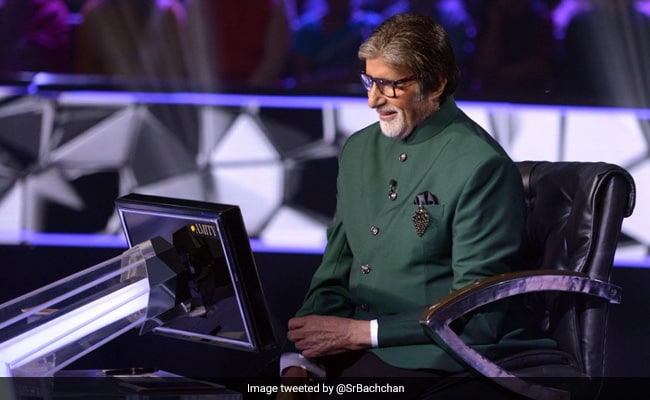 KBC 11: Amitabh Bachchan on the sets of the show. (Image courtesy: SrBachchan)

Host Amitabh Bachchan started Wednesday's episode of the famous quiz show Kaun Banega Crorepati 11 with yesterday's rollover contestant Chandan Kumar. Mr Kumar had in last episode played till the 7th question by exhausting his three lifelines. Continuing the game, Big B asked Chandan Kumar the next question for Rs 80,000. In between the game, Amitabh Bachchan joked about Mr's Kumar's marriage and said he will never comment on his wife Jaya Bachchan's height as it will offend her. Unable to answer the 10th question, Chandan Kumar decided to quit the game. He went home with prize money of Rs 1,60,000.

Taking the game ahead, Amitabh Bachchan asked the remaining contestants another Fastest Fingers First question. This time, Sarabjeet Singh Makkad, a politician from Lucknow, made it to the hot seat. Welcoming Mr Makkad to the hot seat, Amitabh Bachchan said he is truly impressed by his profile and asked him why he decided to make a career in politics. To this, Sarabjeet Singh Makkad said that he believes good and smart people should take part in politics for the better future of the nation. In the game, Mr Makkad took audience poll to answer a question but unfortunately, the audience picked the wrong answer because of which, Sarabjeet Singh went home with prize money of Rs 10,000 only.

Meanwhile, take a look at some of the questions asked on tonight's episode of Kaun Banega Crorepati 11:

#In which city would you find the Bharat Ratna Shri Atal Bihari Vajpayee Ekana Cricket Stadium?

#By what name is the newest chief minister of Sikkim Prem Singh Tamang better known?

Kaun Banega Crorepati 11 airs on Sony TV from Monday to Friday. Follow this space for more updates on the show.