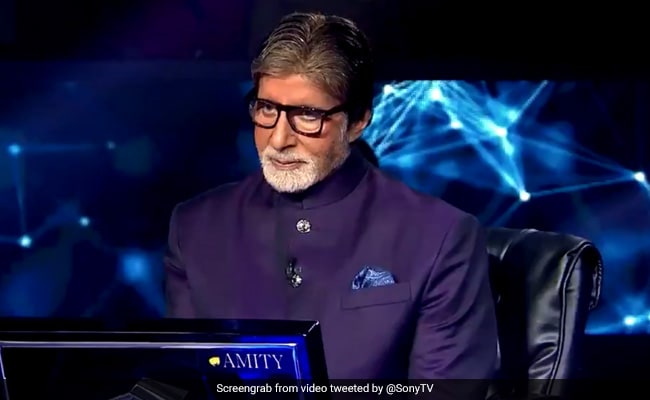 Kaun Banega Crorepati 11: Big B in a still from the show. (Image courtesy: SonyTV)

Monday's episode of Kaun Banega Crorepati 11 began with Amitabh Bachchan apologising for Friday's episode, wherein the showrunners referred to Chhatrapati Shivaji Maharaj as only 'Shivaji' in one of the answer options. Big B, who had earlier tweeted an apology, apologised in tonight's episode once again. Big B hosted only one contestant in tonight's episode of the popular quiz show. Of the 11 aspiring contestants, only three got the Fastest Finger First answer right and Ajeet Kumar from Hajipur, Bihar made it to the hot seat for answering the question in the least time. Ajeet, a jail superintendent shared snippets from his life during the episode. He won an amount of Rs 12,50,000 in tonight's episode and will continue to play in tomorrow's episode.

During the course of the game, Ajeet Kumar resorted to the 'audience poll' and 'flip the question' lifelines and his other two lifelines remain intact. Journalist Ankit Tyagi was the expert in tonight's episode.

Some of the question asked by Big B on Monday's episode of Kaun Banega Crorepati 11 were:

If you reach escape velocity, what are you escaping from?

The tomb of the founder of Suri Empire is situated in which state or UT?

Which of these players finished as the leading run scorer in the ICC Cricket World Cup 2019?

Which film did Manoj Kumar make at Lal Bahadur Shastri's request based on the slogan "Jai Jawan Jai Kisan?"

Which of these freedom fighters was not a part of the Kakori conspiracy of 1925?

Who, according to the scriptures, was the father of Garuda, the king of birds and vehicle of Lord Vishnu?