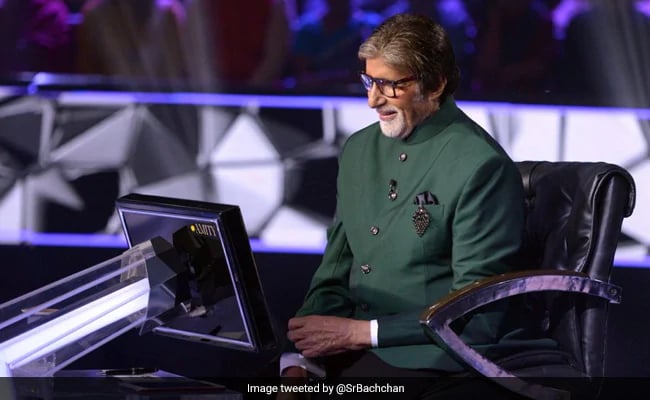 KBC 11: Amitabh Bachchan on the sets of the show. (Image courtesy: SrBachchan)

The quiz show Kaun Banega Crorepati 11 is in its finale week and in tonight's episode the show's host Amitabh Bachchan revealed that this season of the show has been extra special as four contestants went home with a prize of Rs 1 crore. Big B recalled all the big moments from the season, where Sanoj Raj from Bihar's Jehanabad, Babita Tade, a cook at a government school in Maharashtra, Gautam Kumar Jha, a senior section engineer in the Indian Railways, and Ajeet Kumar emerged as crorepatis. Big B hosted two contestants in tonight's episode. He first welcomed yesterday's roll-over contestant Abinash Kumar Mohanta who hails from Baripada, Odisha. He went home with a prize of Rs 3,20,000. The second contestant hosted by Big B was Sukhvinder Kaur. She will continue to play in tomorrow's episode.

In tonight's episode, firefighters from the Mumbai Fire Brigade attended the show. Journalist Shekhar Gupta was on the expert's panel for tonight episode, in order to help the contestants who resorted to the Ask The Expert helpline.

Some of the questions asked in tonight's episode of Kaun Banega Crorepati 11 were:

Which of the following sparkles due to the internal reflection of light?

When returning from Lanka after emerging victorious, whom did Lord Rama send ahead as his messenger to Angad?

How many persons with the surname Patnaik have served Odisha as the Chief Minster?

What does the 'R' stand in the name of the educational organisation NCERT?

How many coastal states are there in India?

In tomorrow's episode of Kaun Banega Crorepati 11, which will also be the final episode of the season, Big B will host author, philanthropist and Infosys Foundation chairperson Sudha Murthy as the special guest.