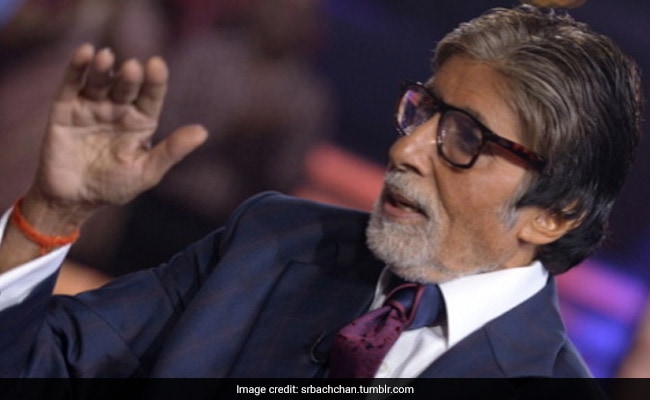 KBC 11: Amitabh Bachchan on the sets of the show. (Image courtesy: srbachchan)

Amitabh Bachchan started the 72nd episode of the final week of Kaun Banega Crorepati with yesterday's roll-over contestant Prashant Kalbende. Before the quiz started, a video montage about Amitabh Bachchan's iconic moments on Kaun Banega Crorepati was shown. After the video, Big B greeted the audience and continued the game with Prashant. Mr Kalbende works in Steel Authority of India (SAIL) in Jharkhand. Amitabh Bachchan introduced the special expert for the episode - mythologist Devdutt Pattanaik.

On a lighter note, when Mr Kalbende revealed on the show that he can't stop himself from complaining about wrongdoings or illegal things, Big B asked him if he also complains about his wife's cooking at home. To this, Mr Kalbende's wife hilariously replied: "Sir, inka ghar mein RTI (Right To Information) nahi chalta hai." Amitabh Bachchan had a hearty laugh after listening to Mr Kalbende's epic stories.

The questions on Wednesday's episode of Kaun Banega Crorepati 11 varied from science to politics. Take a look and tell us in the comments sections how many you were able to answer:

#The title of the TV series "Main Maayke Chali Jaungi Tum Dekhte Rahiyo" is also a part of song lyric from which film?

#In the guns AK-47 and AK-56, if A stands for 'Avtomat,' a Russian word for automatic, then what does K stand for?

#During the tenure of which Chief Election Commissioner of India were electors' photo identity cards introduced for all voters.

The eleventh season of Kaun Banega Crorepati will end on November 29. The show airs on Sony TV from 9 pm from Monday-Friday.