KBC 11: Sakshi Tanwar played the game along with Mr Paliwal on the show 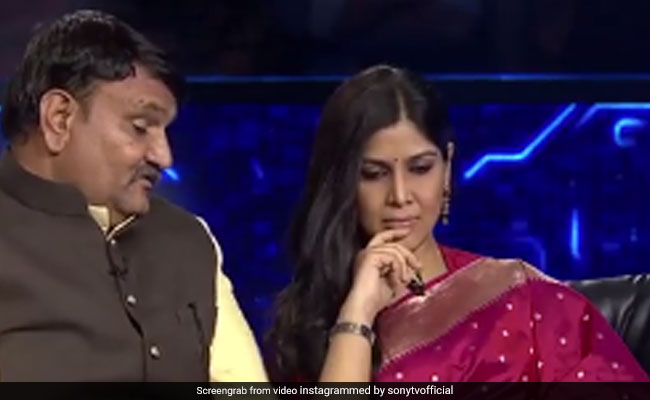 In tonight's episode of Kaun Banega Crorepati 11, Amitabh Bachchan continued the game with Thursday's contestant Sushma Singh Chauhan. In last episode, Mrs Chauhan played till the 9th question won Rs 1,60,000. Starting the game, Big B asked Sushma Singh the 10th question, which she answered correctly. However, she got confused and chose a wrong answer for the next question, thus leaving the quiz with prize money of Rs 1,60,000. For tonight's Karamveer episode, Amitabh Bachchan welcomed Shyam Sunder Paliwal from Rajasthan, who was awarded Nirlam Gram Award by late president A. P. J. Abdul Kalam. Mr Paliwal shared how, after his daughter's death, he turned his sorrow into an inspiring act and achieved great things in life by planting trees in his village. That time, he decided that he will plants 111 trees on the birth of every girl in his village.

To support Mr Paliwal, television actress Sakshi Tanwar played the game along with him. Mr Paliwal has also taken initiative towards constructing public toilets and encouraging people to save money for their girl child, which left Big B impressed.

During the episode, Sakshi Tanwar called Shyam Sunder Paliwal a "great source of inspiration" and said that she will support his effort towards a good cause by planting 111 trees in the name of her daughter Dityaa. Big B praised her for contributing on such a big scale. On a lighter note, after asking a question about Delhi's Tughlakabad Fort, Big B revealed that during his college days, he used to hang out with his friends at the fort.

Later, Shyam Sunder Paliwal also shared his wish to start community weddings to help the families with financial problem. He said that weddings are meant to be celebrated and money should not be a problem, even for poor families, which is why he is planning to start the initiative. Shyam Sunder Paliwal went home with a prize of Rs. 25,00,000.

Meanwhile, take a look at some of the questions asked on tonight's episode:

#The 2019 Nobel Peace Prize has been awarded to Abiy Ahmed Ali particularly for his efforts to end border conflict with which country?

#According to the Puranas, which sage's curse led to King Parikshit, son of Abhimanyu, getting bitten by the serpent Takshak?

#Which mythological character is popularly depicted in plays, serials and films as constantly exclaiming 'Narayan! Narayan!'?

#Which TV actor, famous for playing Bhima in B R Chopra's "Mahabharata," has won five medals for India at the Commonwealth and Asian Games?

Follow this space for more updates on Kaun Banega Crorepati 11.