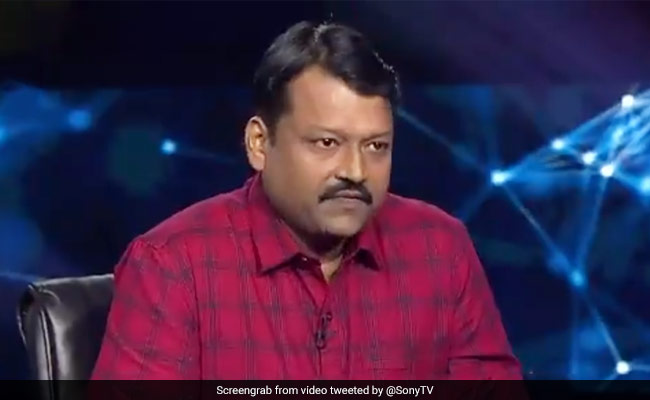 KBC 11: Ajeet Kumar in a still from the show. (Image courtesy: SonyTV)

Tuesday's episode of the popular quiz show Kaun Banega Crorepati 11 began with yesterday's roll-over contestant Ajeet Kumar, a jail superintendent from Hajipur, Bihar, who won a whopping sum of Rs 1 crore. Ajeet became the fourth crorepati of the season. The question that won him Rs 1 crore was: "Which was the first British satellite to have been launched successfully by a British rocket?" Mr Kumar resorted to his final lifeline fifty-fifty in order to get the answer right. He was left with two options - 'Prospera' and 'Miranda.' After taking his time, Mr Kumar finally picked Prospera- which turned out to be the right answer. Ajeet Kumar did not know the answer to the sixteenth and the last question and he decided to quit the game.

The 16th question that was worth Rs 7 crore was: "Who is the first cricketer to score two T-20 International fifties in the same day in two different matches?" Big B congratulated Ajeet on his big win. Ajeet Kumar, who had won Rs 12,50,000 in yesterday's episode had two of his lifelines intact in tonight's episode.

Here are some of the questions that Ajeet Kumar was asked during the game:

To take up a legal matter on behalf of which firm did Mahatma Gandhi go to South Africa in 1893?

Who was the first captain of India's national football team after Independence?

Which of these freedom fighters was not a part of the Kakori conspiracy of 1925?

Who, according to the scriptures, was the father of Garuda, the king of birds and vehicle of Lord Vishnu?

In the current season of Kaun Banega Crorepati, four contestants have managed to become crorepatis. Sanoj Raj from Bihar's Jehanabad was the first one to go home with a prize money of Rs 1 crore, followed by Babita Tade, who was a cook at a government school in Maharashtra. Gautam Kumar Jha, a senior section engineer in the Indian Railways was the third crorepati of the season, and Ajeet Kumar the fourth.