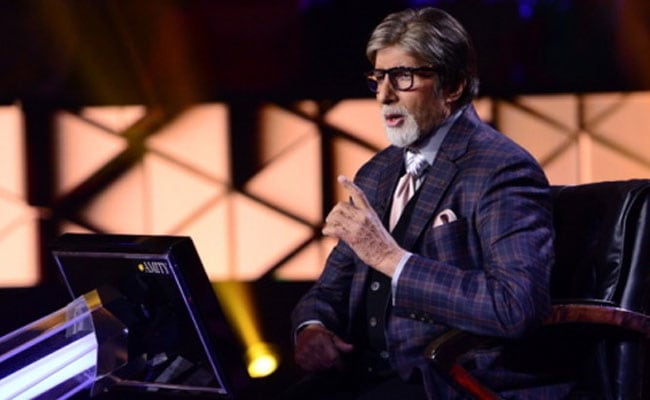 Big B on sets of Kaun Banega Crorepati 11 (courtesy srbachchan)

Amitabh Bachchan is back as the host for the 11th season of Kaun Banega Crorepati and so are his many anecdotes. On Monday's episode, Big B shared a behind-the-scenes story from his 2000 film Mohabbatein, in which he played a stringent headmaster of a prestigious institution. Talking to contestant Aseem Chaudhary from Indore, Big B jokingly referred to himself as he said the film had a veteran actor: "Ek vriddh tha - naam bhul rahe hain unka...", when he was asked by the contestant if he's as strict in real life as well. That's when Big B took a trip down the memory lane and said the film was shot somewhere near London under freezing temperatures.

Aseem Chaudhary went home with a prize money of Rs 12,50,000 after he decided to quit the game. The second contestant on Monday's episode was Sanya Chakravarty, who will continue the game on Tuesday.

Meanwhile, here are some of the questions from Monday's episode of Kaun Banega Crorepati 11. How many of these can you answer? Tell us in the comments below.

Which of these organs is primarily affected during the medical conditions of stroke?

According to Islam, who among the following was not a prophet?

Novak Djokovic is a champion in which sport?

Vaidehi, Janaki and Maithili are other names of which epic character?

Which country renamed its capital in the year 2019 to honour its first president Nursultan Nazarbayev?

Which batsman holds the Indian record for facing the most number of balls in Test match innings,m having broken Rahul Dravid's record in 2017?

Which of these states in India has the highest number of tigers as per the 2018 All India Tiger Estimation Report?