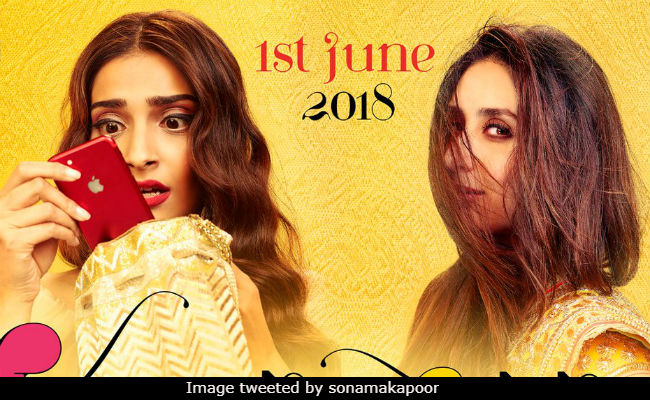 New Delhi: What's wrong, Sonam Kapoor? That's the first reaction most of us will have after a look at the new poster of Veere Di Wedding. In the poster, Sonam shares the frame with co-stars Kareena Kapoor Khan, Swara Bhaskar and Shikha Talsania. The new poster is a wedding invitation of sorts which reminds movie buffs yet again when exactly the film is releasing. "Preparations are in full swing! Save the date for Veere Di Wedding on 1st June 2018! Come join us on this happy occasion! RSVP now!" tweeted Sonam's father Anil Kapoor while Sonam tweeted: "Mark your calendars and get ready for Veere Di Wedding."

The new poster actually captures the different moods of the Veere Di Wedding mains - Sonam looks tensed while Kareena has a chilled out expression while both Swara and Shikha are giving off wedding vibes.

Here are the posters released previously:

Veere Di Wedding is actually Kareena's first film after Taimur was born in December 2016 but dare you call this her comeback film. Speaking to news agency PTI, Saif Ali Khan recently said: "Had you asked this question to her, she would have probably thrown something at you, like a shoe, maybe. As according to her, she has always been around."

Promoted
Listen to the latest songs, only on JioSaavn.com
Sonam's sister Rhea Kapoor, who is co-producing the film with Ekta Kapoor, said: "We are hoping that Veere Di Wedding will usher in a new phase in the Hindi film industry. Nothing like this has been attempted before and we hope it's a fun ride for the audience." Ekta Kapoor added: "This is definitely going to be a wedding to remember. We are happy to announce that Veere Di Wedding will release on the 1st June 2018".

Directed by Shashanka Ghosh, Veere Di Weddingwill hit screens on June 1. It was earlier scheduled to be released in May.