In an interview, Farhan Akhtar's mother Honey Irani talked about the bond she shares with her would-be daughter-in-law Shibani Dandekar 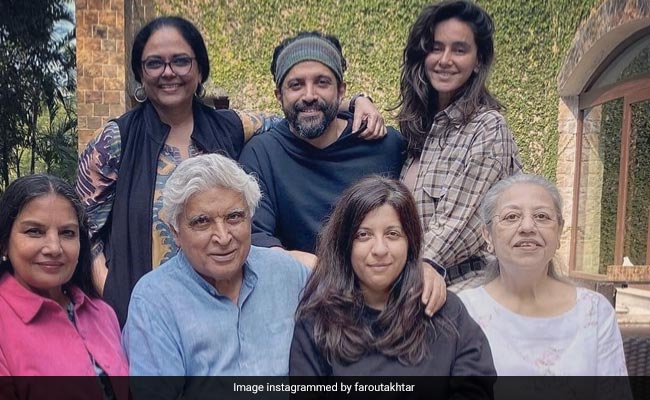 Farhan Akhtar and Shibani Dandekar will reportedly get married on February 19. Before their wedding, Farhan's mother Honey Irani spoke about her would-be daughter-in-law and was all praise. In an interview with Etimes, Honey also talked about Shibani's cooking and said, "Well, she doesn't cook. I must say that she is learning to cook, she keeps trying and I know she will succeed someday. But honestly speaking she doesn't need to cook. We are not in times where we ask things like, 'Kya ladki ko khaana banane aata hai?" (Does the girl know how to cook)

Honey Irani also added that Shibani is a very "lovely child and so beautiful and is extremely respectful towards others." She revealed that Farhan Akhtar and Shibani Dandekar live next door, so they meet every second day. Shibani is "quite a foodie", reveals Honey, who cooks guacamole, dhansak, nawabi keema, and other mutton dishes for her.

On Thursday, Farhan Akhtar and Shibani Dandekar's pre-wedding festivities began with mehendi. The function took place at Farhan's house in Mumbai and close friends and family members were in attendance. Shibani's good friends Rhea Chakraborty and Amrita Arora were also present at the function. Her sisters Anusha and Apeksha Dandekar attended the mehendi function, looking their best.

A source informed Hindustan Times, "The family has been extremely discreet about this wedding as they don't want the media to turn up at the venue. Only family members have been invited. It is still unclear how things are planned, as everything is under wraps. But in most probability, it will be a Maharashtrian wedding."

On the work front, Farhan Akhtar was last seen in Toofan. The film was directed by Rakeysh Omprakash Mehra and Mrunal Thakur was seen as the female lead.