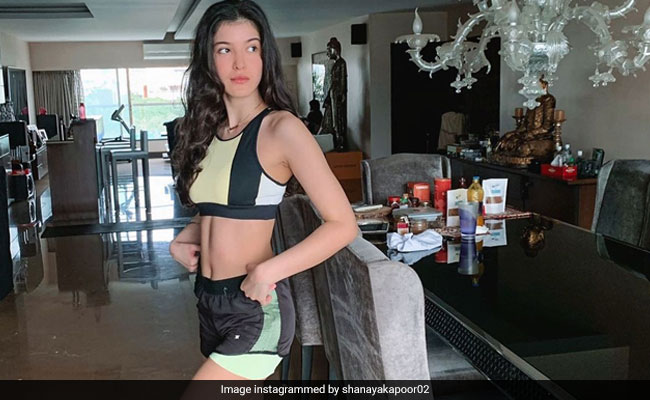 Shanaya Kapoor is the latest rage on Instagram - she recently made her profile open to all and has been sharing interesting posts. On Tuesday, she took an ROFL dig at her mother Maheep Kapoor and her BFF Seema Khan and it's hilarious. Shanaya posted a photo of hers dressed in athleisure, posing for the cameras. But for those who missed it, Shanaya pointed out that Maheep too stars in the backdrop and that she's busy catching up with Seema Khan, a regular scene at home. "Spot Maheep Kapoor, always on the phone with Seema Khan (I hear all the gup)," she wrote.

Seema Khan, in a playful mood, winked at Shanaya in the comments section while Maheep Kapoor, unaware of the photoshoot literally behind her back, reacted with the zipped-mouth emoji.

We got a glimpse of Maheep Kapoor and Seema Khan's friendship in the Netflix show Fabulous Lives Of Bollywood Wives. Neelam Kothari and Bhavana Panday complete the quartet of friends and they too featured on the show. Shanaya is best friends with Bhavana Panday's daughter, actress Ananya Panday, and Shah Rukh Khan's daughter Suhana Khan.

Shanaya Kapoor officially came into the limelight when she made her debut at the Le Bal in Paris in 2019. She has also already joined Bollywood but not as an actor but as an assistant director for Netflix release Gunjan Saxena: The Kargil Girl, which featured her cousin Janhvi Kapoor in the lead role. Shanaya also featured in bits and pieces in Fabulous Lives Of Bollywood Wives.