How It Started For Suhana, Navya Naveli, Ananya And Shanaya - And How It's Going. See Fab Then-Now Pics

Catching up with Suhana, Navya, Ananya and Shanaya 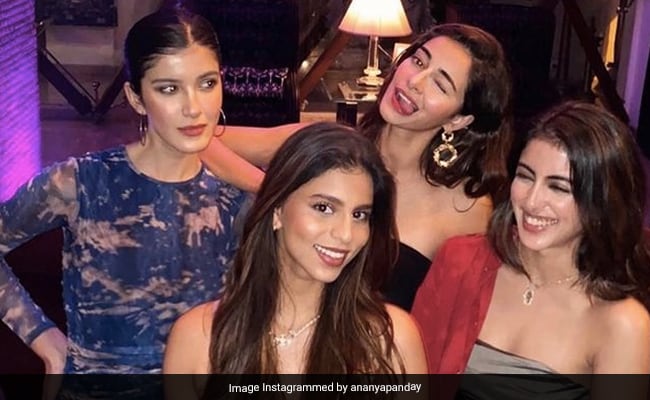 How to party like Bollywood's gen-next? Suhana Khan, Navya Naveli Nanda, Ananya Panday and Shanaya Kapoor are here to tell you. On Wednesday evening, the four friends caught up in Juhu and had a blast. Just a glimpse of the party has been shared by Ananya in a then-and-now Instagram post. Attaching a photo from last night to a throwback memory featuring the four, Ananya wrote: "Nothing really changes (except I don't bite Suhana's head anymore... ok maybe I do sometimes)." Suhana, for her part, added in the comments: "Uhh, and I got taller." A look at the throwback photo will explain Ananya and Suhana's comment exchange. Interestingly, the placement of the four friends in the blast from the past is the same as the recent one - pint-sized versions of Suhana, Navya, Ananya and Shanaya can be seen posing in their swimsuits in the photo. 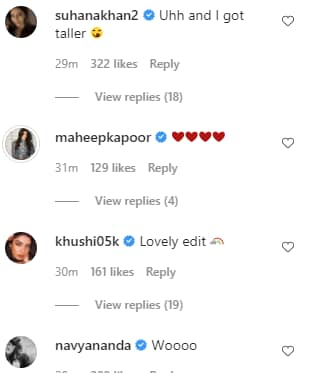 Shanaya's parents Maheep and Sanjay Kapoor filled up the comments section with red hearts. Ananya's mom Bhavana Panday too joined in. Khushi Kapoor, who is their contemporary but not exactly part of this group of friends, found the edit to be "lovely."

Navya Naveli shared a similar post on her Instagram with the throwback memory as the highlight: "How it started vs how it's going," she found just the perfect caption.

Meanwhile, Suhana Khan added shared another photo from the party last night along with an ROFL caption:

Ananya Panday is the daughter of Chunky and Bhavana Panday while Shanaya is Sanjay and Maheep Kapoor's daughter. Ananya was the first of the four friends to step into Bollywood. Her debut film Student Of The Year 2 released in May 2019. Ananya has also featured in films such as Pati Patni Aur Woh and Khaali Peeli.

Shanaya Kapoor began her journey in Bollywood as an assistant director for Netflix film Gunjan Saxena: The Kargil Girl, which stars her cousin Janhvi Kapoor in the titular role.

Shah Rukh and Gauri Khan's daughter Suhana Khan, currently in Mumbai, is pursuing higher studies at Columbia University and aspires to be an actress.

Navya, who is Amitabh Bachchan's granddaughter, started an online healthcare portal called Aara Health, just a week after graduating from New York's Fordham University last year. She even modelled for her mother Shweta Bachchan Nanda's designer label in collaboration with designer Monisha Jaising in the year 2018. Whether she aspires to have a career in films is still not known.