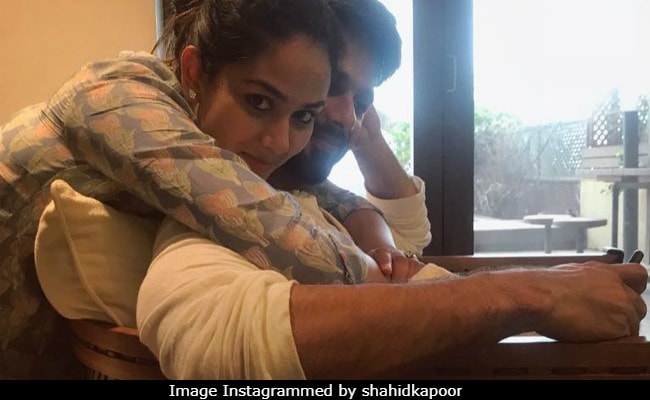 Thank you, Shahid Kapoor for this photo (courtesy shahidkapoor)

New Delhi: Shahid Kapoor and Mira Rajput are setting major relationship goals, no really! The 37-year-old actor just Instagrammed an adorable photo of himself and his wife Mira, who is pregnant with her second baby. For the caption, Shahid kept it cute and simple - he simply added the heart emoticon, which speaks a thousand words. In the photo, Mira and Shahid can be seen in absolute chill mode while their baby daughter Misha is missing from the frame. Misha will turn two in August this year. Shahid's Instafam loves everything about Shahid's new photo and is flooding the comments section with remarks like: "Cutest and most genuine" and "you guys are awesome" and we can't agree more.

Shahid Kapoor's new Instagram entry has garnered over 6 lakh 'likes' in four hours and you will soon know why!

While Shahid and Mira were sharing a loved-up moment together, Misha may have kept herself busy in her recently organised playroom. Glimpses of Mira cleaning up the playroom while Shahid plonked himself on a chair (nope, not working) were shared on the actor's Instagram stories earlier and then arrived this post on Mira's Instagram.

Promoted
Listen to the latest songs, only on JioSaavn.com
Shahid may not have managed time for a babymoon for Mira but looks like he's sliced out time from his busy work schedule to spend more time with his wife and Misha. According to a mid-day report, Sahhid had to cancel plans for a babymoon due to his commitments for Batti Gul Meter Chalu and workshops for Arjun Reddy.

Shahid Kapoor announced Mira's second pregnancy with an adorable post featuring Misha in April this year. Shahid and Mira married in July 2015 and Misha was born in August the following year. On the work front, Shahid co-stars with Shraddha Kapoor and Yami Gautam in Batti Gul Meter Chalu while his new film Arjun Reddy is a remake of Telugu film of the same name, starring Vijay Deverakonda.
Comments
shahid kapoormira rajput