Misha Poses Like A Pro And Mira Wonders Where She Gets It From (Ahem, Ahem... Shahid Kapoor?) 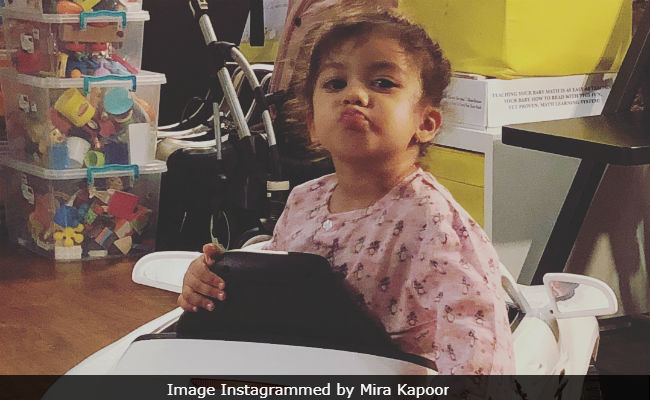 New Delhi: Mira Kapoor's posts never fail to amaze us, be it sharing her daughter Misha's oh-so-adorable pictures or teasing Shahid Kapoor about receiving "infinite hugs" from their little one (remember Mira Kapoor's last post) and her latest Instagram post is no exception. In the pictures, Misha can be seen sitting on her toy car and giving a various expressions. It would be hard for us to say what did we like more about the pictures, Misha's priceless expressions or Mira Kapoor's funny caption. Mira wrote: "I wonder where she gets it from, ignore the mess because that's from before our playroom cleaning." Mira hinted that Misha gets this innate talent from her actor dad Shahid Kapoor and added: "ahem ahem." The post received over 82,000 likes within an hour. Remarks like "cutie pie" and "OMG! So cute" were frequently seen in the comments section. An Instagram user wrote: "She is Mercedes queen." "What mess?? My eyes are on Misha," read another comment.

Mira Kapoor keeps her 1.1 million Instagram followers engrossed by sharing cute pictures with daughter Misha, which mostly send the Internet into a meltdown. Last week, Mira shared a picture with daughter Misha in it and mentioned that she misses Shahid, who, at that time was busy with the shooting of his upcoming film Batti Gul Meter Chalu,co-starring Shraddha Kapoor and Yami Gautam.

Yes we miss you @shahidkapoor but I'm loving the extra hugs all for myself!

Mira Kapoor married Shahid Kapoor at a private ceremony in Gurgaon in 2015 and they welcomed their first born Misha in 2016. Mira, who is expecting her second child, announced her pregnancy on social media in April by sharing a picture of Misha.

Which Misha Kapoor picture is your favourite? Tell us in the comments section.
Comments
mira kapoorShahid KapoorMisha Kapoor