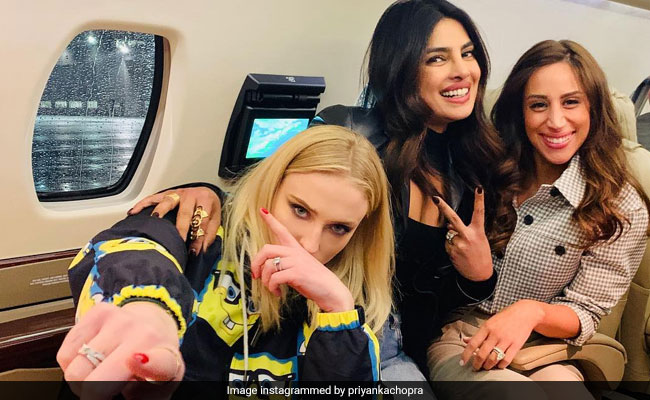 The only ones who can steal the Jonas Brothers' thunder are the Jonas Sisters - Priyanka Chopra (married to Nick Jonas), Sophie Turner (engaged to Joe Jonas) and Danielle Jonas (Kevin Jonas' wife). In a recent interview with Entertainment Weekly, Nick Jonas opened up about Priyanka Chopra's bond with Sophie Turner and also, Danielle, of course, and said that the trio share a priceless rapport with each other. "It's a great feeling... I mean, it's kind of a dream where, as close as we are as brothers, that our wives and fiancee are so connected as well," the publication quoted him as saying.

Elaborating on his point, Nick Jonas said that the reunion of the Jonas Brothers required "huge adjustment for everybody," and that their respective better halves stood by them as constant support. "These incredible women have handled it so well and have been the best support system for each of us, individually and as a group. To get to share that with them is a really amazing thing." The Jonas Brothers returned to the music scene with their comeback single Sucker and all three of the Jonas Sisters featured in it.

Priyanka recently gave a shout-out to Sophie Turner on the eve of Game Of Thrones day. "Good luck Sophie Turner, you are a boss babe. And are very loved," she wrote.

Good luck @sophiet you are a boss babe. And are very loved.. #jsister #gameofthrones tonight

Sophie Turner was a constant part of Priyanka Chopra's wedding entourage and she was even included in Team Ladkiwale. Priyanka and Sophie, along with Nick and Joe are often spotted on family vacations together. Sophie Turner was one of the first ones to welcome Priyanka Chopra into the Jonas family with an official Instagram post after her roka ceremony last year.

Wow. First I'm blessed with an incredible future brother-in-law, and now such an beautiful, inside and out, future sister-in-law. I'm so excited to welcome you into the family @priyankachopra . I love you both @nickjonas