What Makes Bipasha Basu Happy? The Sunshine In Maldives 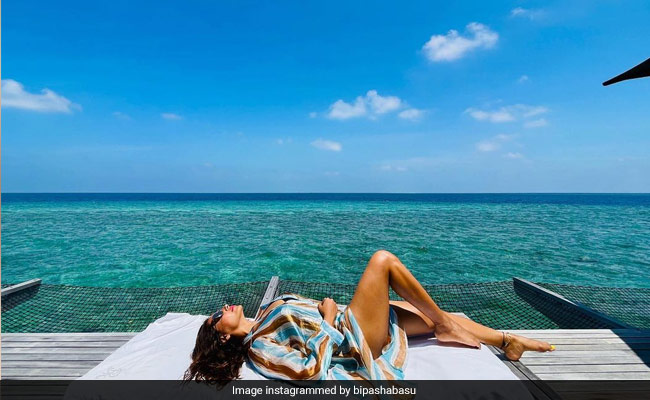 Bipasha Basu is all happy when she is soaking up the sun in Maldives. The actress, who checked into the island nation a few weeks ago, to celebrate her husband Karan Singh Grover's birthday, has been sharing posts from the beach, sun-kissed pictures and is making us envy her swimwear collection. This brings us to her latest post, which is an Instagram Reel. In the video, the actress can be seen happily twirling and dancing around, dressed in a pink bikini and a sheer black shrug. Bipasha, who has minimal make-up in the video, can be seen flashing a bright grin. "Sunshine makes me happy," she captioned the post as the song Pehli Nazar Mein from her film Race plays in the backdrop.

Bipasha Basu was making Maldives look so good. Also, the actress' holiday wardrobe is giving us major fashion goals. From flowy dresses to bright bikinis and swimsuits, the actress' vacation wardrobe has it all. Not to mention the perfect accessorises. See some of her outfits here:

Bipasha Basu, star of films such as Dhoom 2, Dum Maaro Dum, Race, Omkara, Bachna Ae Haseeno and Raaz, began her career as a model. In terms of work, she was last seen in the web-series Dangerous, co-starring Karan Singh Grover, which released last year. The actress also featured as a presenter on the TV show Darr Sabko Lagta Hai.

Bipasha Basu and Karan Singh Grover's love story began on the sets of the 2015 film Alone. The actors got married on April 2016 as per Bengali traditions. They later hosted a reception for their industry friends, which was attended by several Bollywood stars.