Read inOther Languages
This Article is From Mar 17, 2019 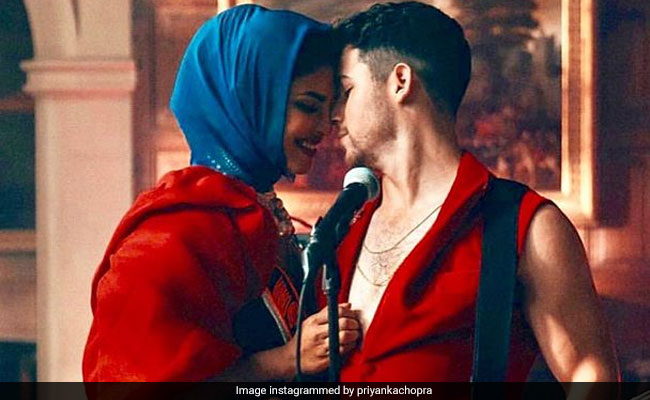 Priyanka Chopra shared another still from the Jonas Brothers' reunion track Sucker and wrote that it was her "favourite." Sucker, which brought the Jonas Brothers - Nick, Kevin and Joe - back after almost six years, currently occupies the top spot on Billboard Hot 100. In the still from the video of Sucker, Nick is dressed in a fiery red vest while Priyanka complemented him in a red jacket paired with a polka-dotted tulle skirt and a blue head scarf for contrast. She wrote: "My favourite. #appreciationpost #1 #sucker." Sucker also features Joe's fiancée Sophie Turner (Game of Thrones star) and Kevin's wife Danielle.

Priyanka Chopra, who recently returned to the US after an extended stay in India where she filmed parts of her upcoming film The Sky Is Pink, earlier cheered Nick Jonas for the fabulous reception of his track. "So good to come home to this! I'm so proud of u baby," she wrote on Instagram. In addition, Priyanka shared a glimpse of her welcome back present - a Maybach - courtesy of Sucker's fabulous performance.

So good to come home to this! I'm so proud of u baby.. @nickjonas @joejonas @kevinjonas @jonasbrothers

When the hubby goes number one.. the wifey gets a @maybach!! Introducing...Extra Chopra Jonas...haha...I love you baby!! Yaaay! Best husband ever...@nickjonas

Meanwhile, Nick Jonas has also started filming the sequel to Jumanji: Welcome to the Jungle.