Cool is a true blue Jonas Brothers deal and we love it! 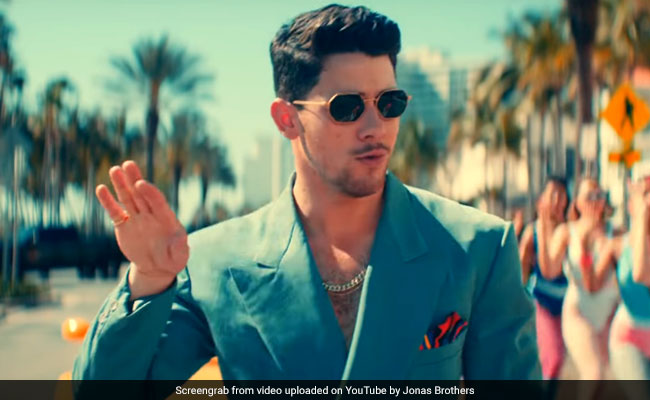 Nick Jonas in a still from Cool (courtesy YouTube)

The Jonas Brothers just dropped their new single Cool and it's pretty awesome - we are so glad the Jonas Brothers reunited! Before we elaborate on what the song is all about, here's a disclaimer - no, there's no cameo by Priyanka Chopra. It's a true blue Jonas Brothers deal and we love it! Cool is basically Nick Jonas and Joe Jonas taking turns to sing: "Lately I've been feeling so cool... top to the bottom just cool... every little thing that I do... damn it I feel so cool..." The video has a feel-good charm to it and feels like the palm tree lined streets of Los Angeles have never looked better. Cool also appears to have major retro vibes - stereo, colourful retro swimwear and oversized blazers - but with a contemporary touch.

The Jonas Brothers have also plugged in a little Game Of Thrones reference in the lyrics: "When I get home... sitting there winning like it's Game Of Thrones..." sings Joe Jonas. Sophie Turner will be so happy! Sansa of House Stark is engaged to be married to Joe.

Another awesome thing is Joe Jonas was spotted wearing the guitar strap that Nick Jonas sported when he was the one man show of his own band Nick Jonas And The Administration sometime in 2009. All is all, Cool is the ultimate summer anthem to chill out to in the car, in your room, by the pool, by the sea and basically everywhere else.

just noticed @kevinjonas is using a lookalike strap to the one @nickjonas used during Nick Jonas & The Administration CRYIN IN THE CLUB #Cool@JonasConcerts@jonasbrotherspic.twitter.com/3eQMrlgt3H

Here's to the Jonas Brothers and their new single Cool!

The Jonas Brothers returned to the music scenario last month with Sucker as their comeback single. It soared to the top of Billboard's list of Hot 100 in almost no time!