Priyanka cheered for the Jonas Brothers - Nick, Kevin and Joe - at their recently held concert at the Tabernacle in Atlanta 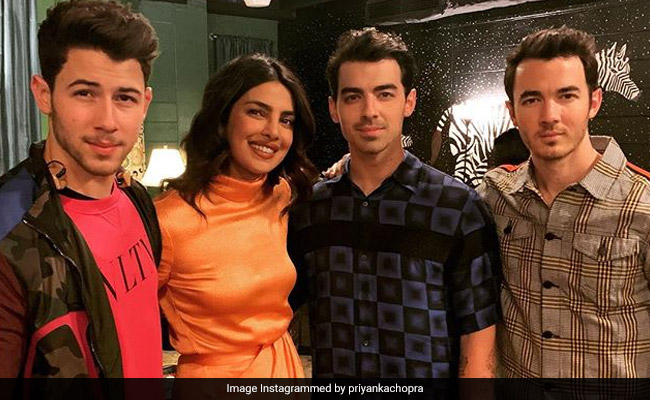 Priyanka Chopra may have starred in the Jonas Brothers' comeback single but she recently checked the "attend a Jonas Brothers show" box on her bucket list. Priyanka, who married Nick in December, cheered for the Jonas Brothers - Nick, Kevin and Joe - at their recently held concert at the Tabernacle in Atlanta and could barely contain her excitement on Instagram. She summed up her experience in just one word: "Incredible" and here's what she actually had to say: "My first ever Jonas Brothers show. And it was incredible! I'm so proud of these guys! Family," she captioned an album starring not just the Jonas Brothers but also Nick Jonas' parents Denise and Paul Kevin Jonas and the youngest of the Jo-Bros - Franklin.

My first ever #jonasbrothers show. And it was incredible!!! I'm so proud of these guys!! #Family

These guys are such rockstars!

Thanks for having us Atlanta

Priyanka's family time with the Jonases wasn't restricted to just the show - the 36-year-old actress cheered for Franklin Jonas at his graduation. She also gave a shout out to the youngest of the Jo-Bros with an adorable Instagram post that said: "The man of the hour! Franklin Jonas we are so proud of you. Graduate! Can't wait to witness what else you will accomplish in your life. To bigger and greater heights! Love."

The man of the hour!! @franklinjonas we r so proud of u.. "Graduate" ! Can't wait to witness what else u will accomplish in your life. To bigger and greater heights! Love u @theblackbirdacademy

Meanwhile, when in Miami, why not let your hair down with DJ Steve Aoki? We can't wait for the collaboration project between the electro music DJ and the Jonas Brothers, like the former hinted in his Instagram post.

This collab would be

Cakes were flyyyyyying last night but this time by new cake recruits @priyankachopra @nickjonas & @joejonas. We made a mess. Sorry @davegrutman @storymiami

Meanwhile on several shows, Priyanka Chopra confessed that she was not as well versed with the Jonas Brothers' musical legacy and body of work. On an episode of Koffee With Karan, she skipped the question about the Jonas Brothers' first album and jokingly said: "I didn't google him (Nick Jonas) before marrying him!" Earlier, she had said she and Nick Jonas bonded over sharing their work history and embarrassing moments at the beginning of their dating months.