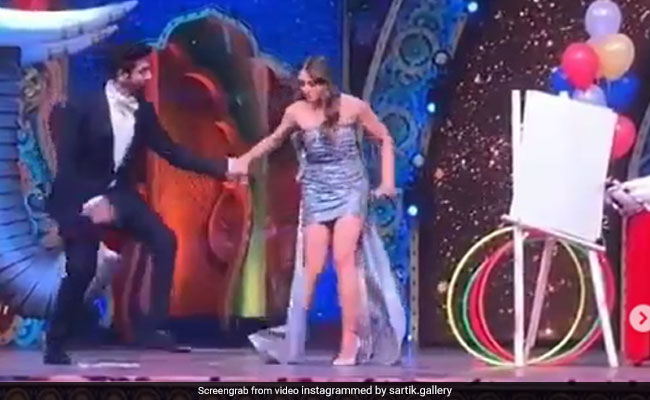 Sara Ali Khan and Kartik Aaryan in a still from the video. (Image courtesy: sartik.gallery )

Sara Ali Khan and Kartik Aaryan occupied the top spot on the list of trends on Tuesday. Why, you ask? Well, the actors are trending for a video from the recently held Star Screen Awards, during which Sara tripped on stage and Kartik held her hand immediately. In the now viral video, Sara can be seen holding her stiletto in her hand as she trips over the train of her dress. However, Kartik quickly held her hand and saved her from falling. In the video, we can hear the song Dheeme Dheem from Kartik's film Pati Patni Aur Woh playing in the backdrop.

Sara Ali Khan and Kartik Aaryan are co-stars in Imtiaz Ali's untitled film, which is said to be the remake of the 2009 film Love Aaj Kal. The film is scheduled to hit screens on February 14 next year. Kartik and Sara announced their association with the untitled Imtiaz Ali project by sharing special posts on their Instagram profiles. Kartik shared a picture and he wrote: "Honored to embark on a journey with Imtiaz Ali's next, the yet untitled film with Sara Ali Khan and Randeep Hooda," Kartik added,"Aur ji haan, issi film ki shooting chalu hai."

Kartik Aaryan and Sara Ali Khan have been featuring in trends ever since Sara confessed on Karan Johar's talk show Koffee With Karan 6 that she would love to date him and he responded saying that he wouldn't mind going out on a coffee date with Sara.

On the work front, Sara Ali Khan will next be seen in Coolie No 1, co-starring Varun Dhawan, while Kartik's last release was Pati Patni Aur Woh, co-starring Ananya Panday and Bhumi Pednekar.