Priyanka Chopra has a Saturday treat for us! 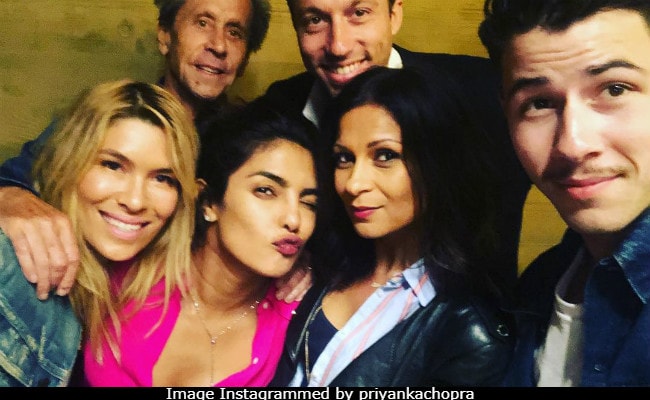 Fans must have seen how lovebirds Priyanka Chopra and Nick Jonas painted Los Angeles pink recently and now, Priyanka has a Saturday treat for us! On her Instagram, Priyanka shared a photo from what appears to be her recent outing with celebrity manager Anjula Acharia, American filmmaker Brian Grazer, other friends and of course fiance Nick Jonas. Priyanka, who clearly had a lot of fun while hanging out with her friends, summed up the night in one photo and this caption: "Fun night. Fun people," she wrote. The photo appears to be a selfie clicked by Nick Jonas, who now visibly sports a moustachioed look.

Shared on Saturday morning, Priyanka and Nick Jonas' photo garnered over 300,385 'likes' in just an hour. Just an hour, folks! Here's what she posted, check it out.

On Thursday, photos of Priyanka and Nick walking hand-in-hand, cuddling and laughing their heart out took over fan clubs on social media - the viral photos were from the same "fun night" Priyanka mentioned in her post. Even on the streets of LA, Priyanka was not hard to spot in a bright pink shirt-pant combo from the shelves of A.L.C.

Priyanka may be living her California dreams to the fullest but the actress is still very much a desi girl at heart. She did not miss out on wishing her fans and followers back in India at the onset of Ganesh Chaturthi.

Today marks the beginning of #GaneshChaturthi... A festival where we invoke the blessings of Lord Ganesh, the remover of obstacles. Here's wishing everyone a week filled with beautiful memories and a life filled with blessings! Ganpati Bappa Morya!

Before they were spotted in Los Angeles, Priyanka and Nick made a couples entry to the New York Fashion Show as they attended Ralph Lauren's 50th anniversary celebrations at Central Park's Bethesda Terrace. At the fashion gala, Priyanka was stunning in a crystal-embellished Ralph Lauren ensemble, while Nick was sharp and suave in a tux from Ralph Lauren's Purple Label collection.

Priyanka Chopra, 36, and Nick Jonas, 25, confirmed their engagement in Mumbai last month with an intimate roka ceremony and a party afterwards. After their departure from India, they were spotted holidaying in Mexico and then photographed together at the US Open tournament. Ahead of that, they went on a Malibu retreat. While fans can't wait to see the Priyanka Chopra-Nick Jonas wedding happen, the couple haven't announced a wedding date yet.