Viral: Malaika Arora Tried Making Besan Laddoos. So, How Did She Do? 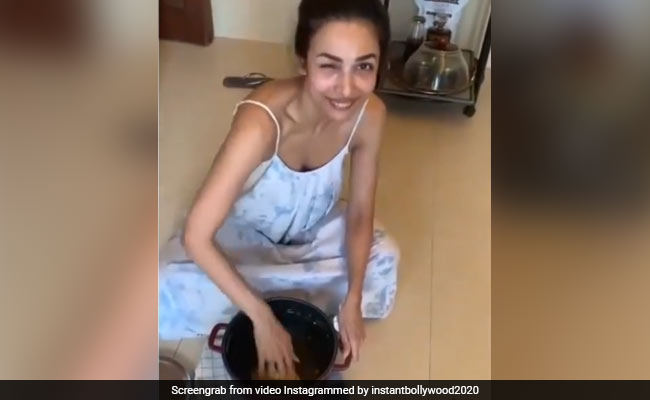 Malaika Arora in a still from the video. (courtesy instantbollywood2020 )

We are pretty sure that you have seen Malaika Arora working out several times. Malaika, who is a self-confessed fitness enthusiast, frequently shares posts pertaining to her fitness diaries on her Instagram profile, so much so that her timeline is flooded with workout related posts. But a little cheat meal never hurt anyone and Malaika is not an exception either. A video of Malaika making besan laddoos has been going insanely viral on social media. Several fan pages dedicated to Malaika have posted the video on Instagram. So, in case you missed the video by any chance, take a look at it here:

On Wednesday, Malaika gave her Instafam a glimpse of what her days look like. Sharing multiple pictures, she wrote, "Cook, clean, workout, staying positive, sleep, some introspection, family time, repeat .... all the perks of staying at home." She added the hashtags #Stayhome, #Stayhealthy and #Staysafe to her post.

On the work front, Malaika Arora was last seen as one of the judges on the TV reality show MTV Supermodel Of The Year, alongside Milind Soman and designer Masaba Gupta.

She has featured in films like Kaante and EMI among others. She is best-known for her dance sequences like Chaiyya Chaiyya from Dil Se, Munni Badnaam Hui from Dabangg , to name a few. She has featured as a judge in several television dance reality shows such as Nach Baliye, India's Best Dancer, Jhalak Dikhhla Jaa and others.