Mahesh Babu instagrammed a photo, in which he can be seen kissing his wife Namrata Shirodkar. "Thank you, my love," he captioned it 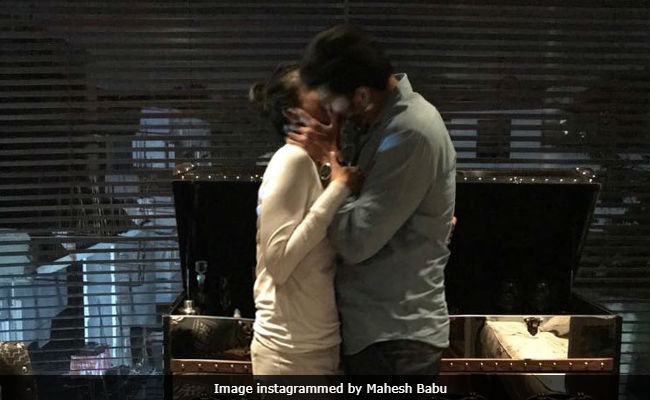 New Delhi: Mahesh Babu is basking the success of his latest Telugu film Bharat Ane Nenu, which has collected over Rs 100 crore worldwide in two days but that's another story. This story is of the viral picture instagrammed by Mahesh Babu, in which he has shared a rather intimate moment with his wife Namrata Shirodkar, which is making his fans blush. "I am feeling shy," wrote one Instagram user in the comments section. The photo has over 1 lakh likes in 12 hours. "Thank you, my love," Mahesh Babu captioned the photo and tagged Namrata Shirodkar. Namrata reposted the photo on her own Instagram account and added: "This one's for my wall."

Namrata Shirodkar quit film after getting married. She was last seen in Gurinder Chadha's Bride and Prejudice, which released in 2004. Mahesh Babu is churning one superhit after another. Before Bharat Ane Nenu, he made bilingual SPYder, which was super successful at the box office. The film was directed by AR Murugadoss.

Now, Mahesh Babu will shift his focus to his next film, which is directed by Vamsi. Details, including the film's title, have not been revealed yet.
Comments
mahesh babunamrata shirodkarbharat ane nenu