Vidya Balan Describes Herself As "Somewhere Between Sulu And Shakuntala Devi"

"I'm at a stage in my life where I'm somewhere between Sulu and Shakuntala. I believe the film has given me more push towards being Shakuntala," said Vidya Balan 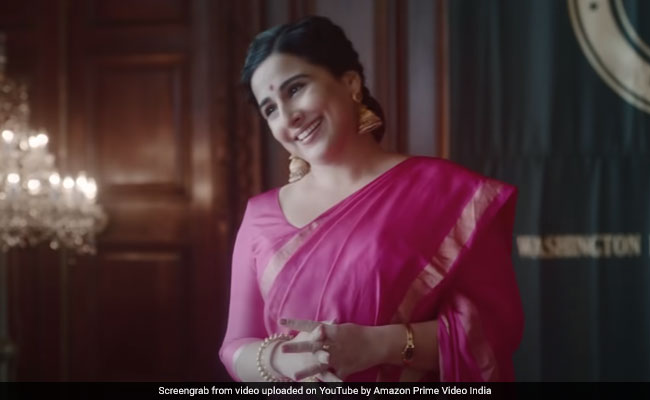 Actor Vidya Balan says there are moments of self doubt in her life but playing a character like mathematics genius Shakuntala Devi, who owned her choices, acts like a source of inspiration. The actor said the biopic strengthened her belief that it is okay for women to claim ownership on their lives without being apologetic. "She owned her choices and stood her ground. Her story definitely inspired me and has shown me that it is actually okay for a woman to want it all in life," Vidya told PTI in an interview.

"Shakuntala Devi enjoyed the attention and she couldn't understand the world saying that 'You are a wife now or you are a mother and your priorities should change.' She had this gift and she wanted to celebrate it. She was someone who wanted it all and had it all," she added.

Directed by Anu Menon, the biographical drama touches upon the various events in the life of Shakuntala Devi, whose ability to solve complex mathematical problems swiftly, made her famous as the "human computer".

In her last solo theatrical outing, Vidya played the role of a middle class housewife, struggling to strike a balance between her family duties and her new found ambition for radio jockeying.

But Shakuntala Devi, 41-year-old actor said, was in complete contrast to Sulu as she didn't believe in giving into social constrains and kept her ambition at the top of her priority list.

"Sulu was more traditional. She was still functioning within the constraints of the traditional middle class family. She was negotiating and navigating her way. We women have been taught to prioritize everyone else in our families. We put ourselves last."

"And here was Shakuntala Devi who was refusing to do that. She said 'Yes, I love my family, my child, but I love myself as well. Why should that be wrong?"

Vidya is known for treading her own path in Bollywood by playing varying shades of women in critically and commercially successful movies such as Kahaani, No One Killed Jessica, Ishqiya and The Dirty Picture.

But that choice brings its share of self doubt.

The actor said in her personal life, she is still away from achieving the level of fearlessness that Shakuntala Devi had as she still questions her decisions.

"I'm at a stage in my life where I'm somewhere between Sulu and Shakuntala. I believe the film has given me more push towards being Shakuntala. But I still go through self-doubt. I question myself and my choices sometimes."

Vidya said she relies on her family to resolve the conflict in her mind. "I have always spoken to my family very openly and since Siddharth (Roy Kapur) and I got together, I speak to him very openly and share everything."

"Just speaking about it helps me resolve so much in my head. It gives me perspective. I think, whenever I have self-doubt I voice it. I believe the more you voice it, the more you realize that it uses its power over you. And slowly you feel better," she added.

Vidya believes the film, which premieres on Amazon Prime Video on July 31, is a reminder for women to love themselves and prioritize their ambitions.

"Her life is so inspiring because it makes us think that if she could live her life on her own way at that time, what are we doing not claiming ownership on our lives and our dreams as women," she said.

"She was at her peak during 1960s and 1970s, so if she could do it why we can't? I definitely think now there are more women who are aware that they have the right to their lives and they are aware about their rights and conversations about gender equality. But we still have a long way to go," the actor added.

The movie focuses on Shakuntala Devi's journey as the calculating prodigy from India, who travelled across the globe creating records with her skill in solving complex mathematical problems without any mechanical aid and winning hearts with her wit.

"She had a wicked sense of humour, loved to party and loved tap dancing. Her daughter (Anupama Banerji) told me she and her husband (Paritosh Bannerji) used to go for tap dancing in clubs in Calcutta. She loved to dress up. She was interested in life," Vidya said.