Vicky Kaushal Is Logging Gym Hours To "Pay For Those Fries"

Vicky Kaushal shared a photo from the gym, looking determined to ace his fitness goals 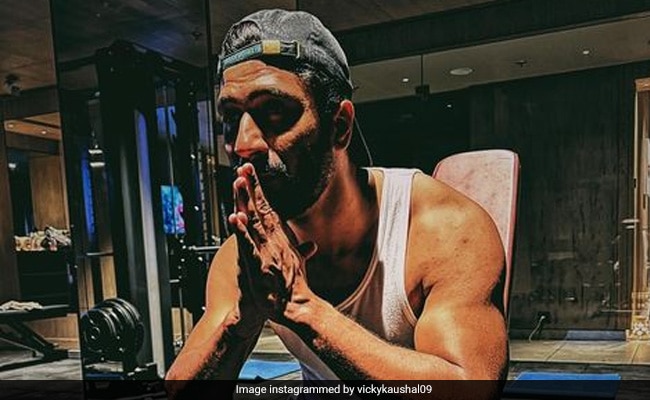 Vicky Kaushal is a national heartthrob and for good reason. His acting skills and suave looks aside, the actor is known for keeping it real, both on-screen and off-screen. Vicky Kaushal's presence on Instagram is a breath of fresh air and Vicky Kaushal, on Wednesday, gave us another post to dote on. In the image, he is seen in the gym with a determined look on his face. And, the man only has one goal in mind – "Time to pay for those (fries emoji)," he declared in the caption. Dressed in a sleeveless T-shirt, sweatpants, cap and shoes, he looks dapper as always in the image. Fans of the star lined up in the comments section to cheer him on with encouraging notes.

In the caption, Vicky Kaushal is in all likelihood referring to a plate of fries and a tall glass of coke that he treated himself to as a post-pack cheat meal a few days ago. He had shared the picture of his meal on Instagram Stories. Read all about it here.

Vicky Kaushal, who is in Indore to shoot for his new film, had shared two images of himself from the location, enjoying the warmth of the Sun. In the pictures, Vicky Kaushal – dressed in a sweatshirt – is smiling for the camera. In the post, he dropped a cold face, a happy face, and a film emoji.

Vicky Kaushal was also recently joined on the sets by his wife, actress Katrina Kaif. The couple, who got married in a dreamy December wedding, spent their first Lohri together. A photo of them standing in front of the bonfire with arms around one another and wide grins on their face sent fans into a tizzy. Sharing the picture, Vicky Kaushal wrote, “Happy Lohri.” with fire emoji.

Katrina Kaif too dropped a bunch of images from Indore as she lounged in her swanky room. Smiling for the camera in a series of pictures, Katrina Kaif added a rather witty caption that said, “Indoors in Indore.”

Vicky Kaushal was last seen in the film Sardar Udham, which brought him stellar reviews. He will soon be seen in Field Marshal Sam Manekshaw's biopic. Katrina Kaif, meanwhile, was last seen in Sooryavanshi with Akshay Kumar. Her upcoming films include Phone Bhoot and Jee Le Zaraa among others.