Varun Dhawan Tried Rap And Ice Skating Together. So, How Did He Do?

"Watch till the end so you know why you should never try this," wrote Varun Dhawan 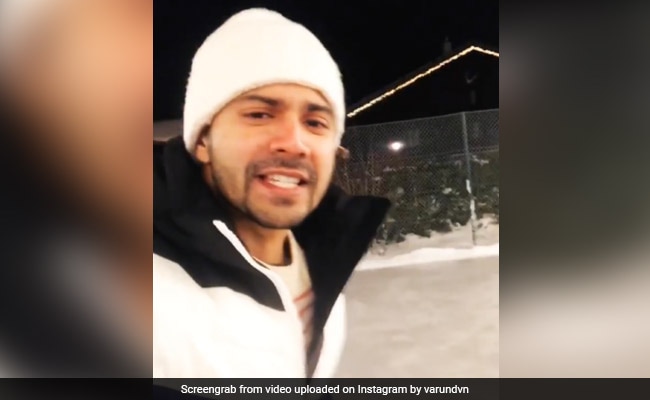 Varun Dhawan in a still from the video. (Image courtesy varundvn)

Varun Dhawan has been quite experimental in terms of the roles that he has portrayed on screen. From Badlapur to October and even Judwaa 2, the actor never shies away from portraying drastically different characters and IRL too the actor did that. In case you are wondering what we are talking about, we are referring to a recent video posted by the actor, in which he can be seen trying his hand at rap and ice skating (together). Sharing the video on his Instagram profile, Varun wrote: "Rap and Ice skate. Watch till the end so you know why you should never try this." By the end of the video, Varun falls on the ice but that did not stop him from rapping. Varun tagged rapper Badshah in his caption and wrote: "Sorry Badshah, I tried."

RAP and ICESKATE #Sd3 Watch till the end so u know why you should never try this!! Sorry @badboyshah I tried

Varun Dhawan, who has been accompanied by his girlfriend Natasha Dalal to Switzerland, has been actively sharing pictures from his vacation. During his trip, Varun bumped into Anushka Sharma and Virat Kohli and shared a selfie with the star couple. The picture also features his girlfriend Natasha Dalal. He captioned the picture: "Mountain ke dost."

During his Swiss vacation, Varun also met Kareena Kapoor and Karisma and shared a picture from their meeting. ICYMI, take a look at it here:

On the work front, Varun Dhawan is busy with the promotional duties of his forthcoming film Street Dancer 3D, which also stars Shraddha Kapoor and Nora Fatehi. The film has been directed by Remo D'Souza and it is slated to release on January 24, 2020. The actor also has Coolie No 1, co-starring Sara Ali Khan, in the pipeline. The period drama Kalank remains his last release.