This Pic Of Kareena, Karisma Kapoor And Varun Dhawan Is No 1

When Varun Dhawan bumped into Kareena and Karisma Kapoor in Switzerland 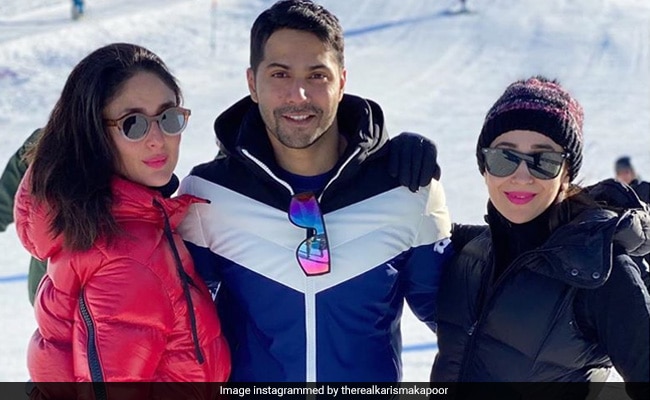 Kareena Kapoor and sister Karisma are making the most of the holiday season. The sister duo, who are currently on a vacation in Switzerland, have been trending big time for their vacation pictures. Karisma Kapoor has been actively sharing pictures from their vacation on her Instagram profile. BTW, did you know that the Kapoor sisters were joined by Varun Dhawan. Karisma posted pictures from their meeting. In the picture, the trio can be seen happily posing, dressed in puffer jackets. Karisma captioned the post: "See who we met! Varun Dhawan." She added the hashtags #holidayseason and #snowydays to her post.

Karisma Kapoor makes frequent appearances on Varun Dhawan's Instagram profile. Karisma has worked with Varun's father David Dhawan in several films. The duo have worked together in films like Raja Babu, Coolie No 1, Saajan Chale Sasural, Judwaa, Judwaa, Hero No 1 and Biwi No 1 among many others.

Varun Dhawan and Karisma Kapoor have been actively sharing pictures from their Swiss vacation. Check out the pictures here:

It's all Good News ! . #familytime #familyfun

On the work front, Varun Dhawan is currently busy with the promotional duties of his forthcoming film Street Dancer 3D, co-starring Shraddha Kapoor and Nora Fatehi. The actor will next be seen in the remake of Coolie No 1, co-starring Sara Ali Khan.