Karisma's Flashback Friday post comes with an interesting caption, in which she talks about her eyebrows 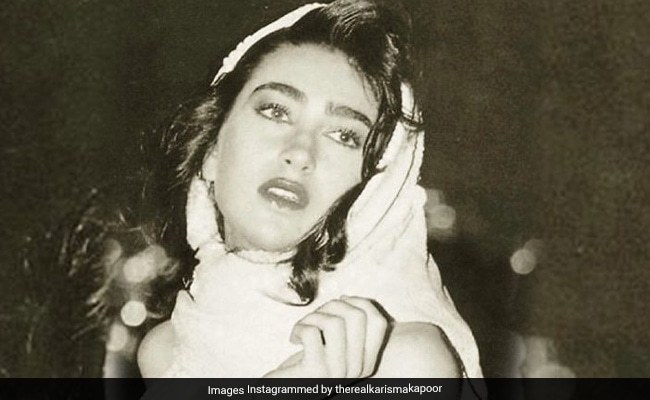 Karisma Kapoor, who is a bona-fide fan of throwback photos, treated her fans to a flashback memory this Friday. The 45-year-old actress shared a glimpse of her younger self, much younger - from when she was 18 - and sent the Internet into a meltdown. Karisma's Flashback Friday post comes with an interesting caption, in which she talks about her eyebrows - "Eyebrow game strong. Me at 18!" she wrote and added the blushing cat icon. Karisma's Instafam emptied their stash of the fire and heart emoticons. Karisma's throwback memory appears to be from shooting or film promotions. Karisma made her Bollywood debut with Prem Qaidi, when she was just 17. In 1992, the year Karisma turned 18, she starred in films such as Police Officer, Deedar, Jigar Jaagruti, Nishchaiy and Sapne Sajan Ke.

Eyebrow game strong me at 18 ! #flashbackfriday

We stumbled upon more such throwback posts on Karisma Kapoor's Instagram, some of which feature her as a baby. Here's one of Karisma Kapoor with dad Randhir Kapoor.

Pint-sized Kareena Kapoor also often pops up in Karisma's throwback posts. Here's one Karisma posted with Babita and Karisma, writing: "To my Pillars" on Women's day.

Karisma Kapoor ruled the screens in 90s and early 20s. Her breakout film was the 1996 romantic-drama Raja Hindustani, opposite Aamir Khan. Karisma is best-known for her performances in films like Dil To Pagal Hai, Judwaa, Biwi No 1, Coolie No 1, Zubeidaa and Fiza among many others. On the big screen, Karisma was last seen in 2012 film Dangerous Ishhq.