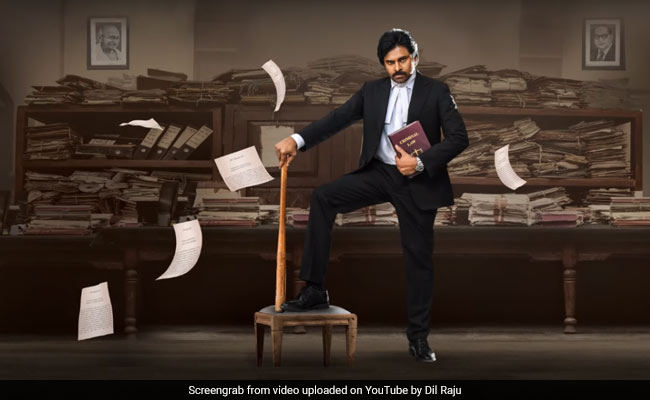 On actor Pawan Kalyan's birthday today, the makers of his upcoming film Vakeel Saab dropped the film's motion poster on social media as a gift for his fans. Producer Boney Kapoor shared the YouTube link of the motion poster and wrote, "Wishing our Vakeel Saab, Power Star Pawan Kalyan a very Happy Birthday." The video begins focussing on the photos of Mahatma Gandhi and Dr BR Ambedkar - usually found in a lawyer's office - and it moves to a desk with piles of files and documents. Enter, Pawan Kalayan, dressed in black-and-white, with a book on criminal law in one hand and a baseball bat in the other. "Satyamev Jayate," echoes in the background.

Vakeel Saab is the Telugu remake of Hindi film Pink. Pawan Kalyan plays the part immortalised by Amitabh Bachchan in the movie. Mr Bachchan played a lawyer who comes out of retirement to help three young women falsely implicated in a criminal case. Pink, directed by Aniruddha Roy Chowdhury, won the National Film Award for Best Film on Other Social Issues.[

Earlier today, producer Boney Kapoor also announced financial support to the families of the fans of Pawan Kalyan, who died while making arrangements for the actor's 49th birthday. "With heavy hearts, we express our deepest condolences to the families of the three fans who unfortunately lost their lives. We, along with millions of others, express our solidarity to their families in this hour of grief... We also request all fans to value their lives and be safe," his statement read.

Meanwhile, Vakeel Saab is the second adaptation of Pink after it was remade in Tamil as Nerkonda Paarvai with actor Ajith in the lead role. The film opened in cinemas in August 2019. Vakeel Saab was slated for May 2020 release but it couldn't after the theatres shut down due to the coronavirus-led lockdown.