Ujda Chaman Director On Bala Makers Changing The Release Date: 'They Are More Worried Than Me'

"With them coming on November 7, they are not letting me make money, which is also a part of the industry revenue," said Abhishek Pathak 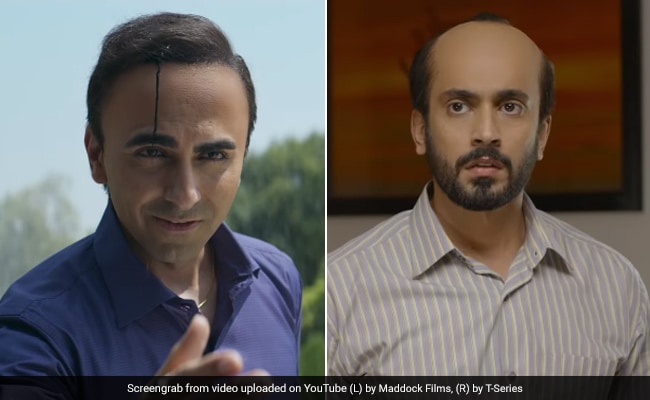 Ujda Chaman director Abhishek Pathak occupied a spot on the list of trends on Tuesday after he claimed that the makers of Bala are more "worried" than him and that's why they have changed the release date from November 15 to November 7. Ayushmann Khurrana's Bala was earlier scheduled to release on November 15 while Sunny Singh's Ujda Chaman is slated to release on November 8, a day after Bala. In an interview with news agency IANS, Abhishek Pathak talked about the similarity in the plots of his film and Bala and said that Maddock Films shifted the date because they are more "concerned and worried" and want to release their film before them.

"If they are coming from November 15 to November 7, they are more worried than me. Otherwise, they would not have moved. They are worried and that is why they moved. They want to come before us. Even after having big stars in the film, they are shifting the date because they are concerned, worried or I don't know what... But they should be thinking about it," Abhishek told IANS.

Abhishek Pathak also said that by changing the release date, Bala makers are not "letting him make money." He added: "I wouldn't have eaten into their business. With them coming on November 7, they are not letting me make money, which is also a part of the industry revenue. It is not fair on their part. They should be supporting us."

Bala and Ujda Chaman highlight the plight of a young man, who suffers from premature balding. In Bala, Ayushmann Khurrana plays the role of the protagonist while Sunny Singh is the hero of Ujda Chaman. Bala also features Yami Gautam and Bhumi Pednekar.

When asked if he made an attempt to reach out to the team Bala to share grievances, Abhishek said: "I spoke to them when I read about them making a film like this. I told them, 'We have rights to make this film, why are you doing it?' They said it is a different film but looking at the trailer, it doesn't seem to be a different film."

Abhishek Pathak also initiated a legal action against the makers of Bala, which is currently in the process. He said: "(Legal action) is in the process right now. I don't know what the legal team is doing. I will get to know the process in a day or two. Right now, I am only focusing on making the film. I can't mix the two things. I am focusing on that and team is handling the legal part."

After producing films like Pyaar Ka Punchnama series, Drishyam, Raid and Section 375, Abhishek Pathak is making his directorial debut with Ujda Chaman, which is a remake of the Kannada film Ondu Motteya Kathe. Along with the subject of baldness, Ujda Chaman also puts the spotlight on issues that overweight people face in society and how society is becoming "superficial." The film showcases the story of a 30-year-old man, who is looking for a bride but is faced with several rejections.

Talking about the storyline, Abhishek Pathak said: "We live in a superficial world. Everyone wants to find a beautiful partner but a person can be beautiful within and from the heart as well. The film talks about this."