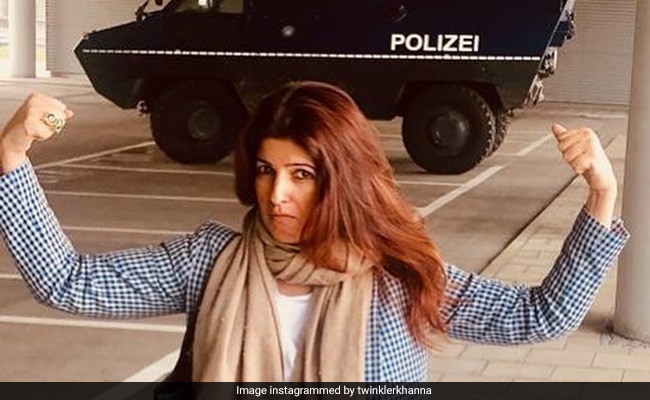 Leave it to Twinkle Khanna to amuse her fans with humour-infused posts. The 46-year-old author did just that in her latest Instagram entry as well. Twinkle, in her post revealed that her 17-year-old son Aarav has saved her phone number as "Police." Seems like Mrs Funnybones sort of gave the perfect contact image to his son. She shared a picture, in which she can be seen posing with a police vehicle in the backdrop. Dressed in a checked blazer, a white t-shirt and a pair of blue denims. She finished her look with a camel-coloured scarf. But the highlight of the post is definitely Twinkle's pose and her goofy expression.

Sharing the post on her Instagram profile, Twinkle Khanna wrote: "Considering my son has saved my number as 'Police' on his phone I suppose this is rather apt." Check out the post here:

Last week, Twinkle Khanna and Akshay Kumar celebrated their 19th wedding anniversary together. Akshay and Twinkle shared identical posts on their respective Instagram profile and Akshay captioned it: "Visual representation of what married life looks like...Some days you wanna cuddle and some days look like...As you can see. All said and done, I wouldn't have it any other way."

#Repost @akshaykumar Visual representation of what married life looks like...some days you wanna cuddle and some days look like...as you can see All said and done, I wouldn't have it any other way

Twinkle Khanna keeps her Instafam busy by posting humour-infused posts. Check them out:

From one shoot to another:) I am glad I got the chance to wear my priceless gifts that were brought home from a shoot, before they started sprouting shoots themselves:) #OnionsAreAGirlsBestFriends

When you want to eat and your friend insists you wait so that the meal can be served on Instagram first :) #petpeeve

Twinkle Khanna is a celebrated columnist and the author of Pyjamas Are Forgiving, The Legend Of Lakshmi Prasad and Mrs Funnybones - all of which were best-sellers. Twinkle is also an interior decorator, the owner of The White Window, and a film producer. Her last project as a film producer was the National Award-winning film PadMan, which starred her husband Akshay Kumar in the lead role.