Dear Twinkle Khanna, Stop Making Pretend Moustaches And Get On With Book No 4 Already

Twinkle Khanna shared the goofy picture of herself much to the delight of her Instafam. 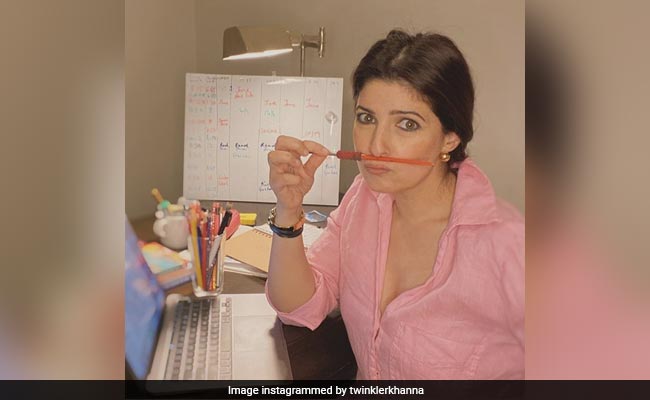 We have good news. Twinkle Khanna is working on her next book and given her past work, we are sure it is going to be a cracker of a read. It looks like the only thing coming in the way of Twinkle Khanna and her next book are a few of her daughter's paintbrushes that seem to have caught the former actress' attention. Twinkle has revealed in a new Instagram post that she is sharing the working space with Nitara and this means playing around with the little one's paintbrushes. Sitting at the desk, Twinkle is seen making a fake moustache by holding a paintbrush under her nose.

Sharing the image, Twinkle Khanna wrote, “A shared working space means I can goof around with her paintbrushes and create pretend moustaches while working on Book No 4.” She also added the hashtags “work in progress” and “writing life”.

On the “shared working space” of the mother-daughter duo, we can see a whiteboard, a bunch of notebooks and pens as well as the laptop that Twinkle Khanna is working on. Well, we can't wait to read the magic that will be created in this space.

Nitara is not the only family member who has graced Twinkle Khanna's Instagram timeline. A few days ago, Twinkle Khanna shared an image with her son Aarav on his birthday. In the picture, the mother-son duo is seen sitting under a tree, smiling for the camera. Twinkle Khanna wrote in her caption, "My beautiful birthday boy," with a heart emoji.

Twinkle Khanna had also shared a heartfelt note for her daughter, talking about the inexplicable bond between mothers and children. An excerpt from the note reads, “You have pieces of me in you and science merely confirms what I already knew, there are bits of you inside me too.” In the picture that accompanies the note, Twinkle and Nitara are seen cuddling with each other.

In addition to sharing working space, Twinkle and Nitara also spend their yoga time together. In one picture, while Twinkle is meditating, Nitara is seen sitting patiently in front of her, looking up at her mom. “I have always said that a round of pranayama a day keeps my inner werewolf at bay. It is the sankalpas I make during my practice that determine the course of my life,” said Twinkle in the caption.

Twinkle Khanna has authored three best-selling books, so far. While she made her writing debut with Mrs Funnybones, a compilation of her columns, her second book, The Legend Of Lakshmi Prasad, was a collection of short stories. Pyjamas Are Forgiving was her third book.  In addition to being an author, she is also a film producer and an interior decorator. She is married to actor Akshay Kumar.