Not A "Walk In The Park," Akshay Kumar And Twinkle Khanna Are Actually Heading To... 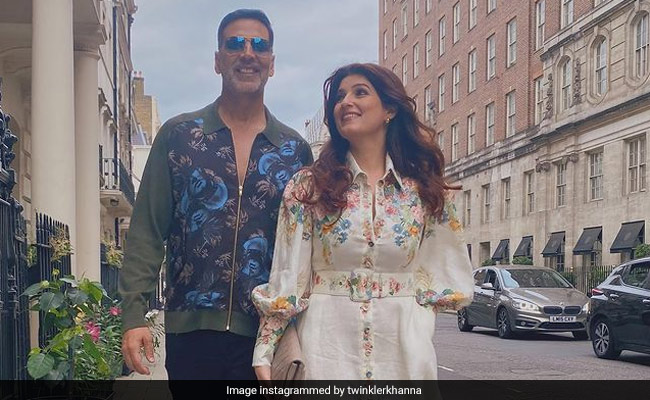 Akshay Kumar is one happy man. And, he has ample reason to be, given that his latest film Bell Bottom has received the stamp of approval from his wife, author Twinkle Khanna. The former actress posted a candid picture of the duo walking on the streets of London. But don't be fooled by the picture, Twinkle said in the caption. The couple, who look glamorous as always, is not going for a stroll but to watch the screening of Akshay Kumar's latest release. Twinkle's caption said, “Looks like a walk in the park but we are actually heading to something even better, the screening of Mr K's fabulous movie - Bell Bottom.”

That's not all. The doting wife even left the hashtag “must-watch” in the caption. Akshay Kumar was no doubt pleased with Twinkle Khanna's reaction to the movie. And given how witty and smart Twinkle is, we are sure getting her nod for a movie is no easy feat. An excited Akshay Kumar lost no time to reply to the post with a sweet comment. Picking up on what Twinkle wrote in her caption, he said, “It feels like a walk in the park when she approves. Bell Bottom is a must-watch; she said it, not me.” To this, Twinkle dropped a heart emoji.

Producer Deepshikha Deshmukh also seemed elated by the response Twinkle Khanna had given to the film. “Yayy yay yay, she approves,” Deepshikha said. To this, Twinkle replied, “You guys don't need my approval but I do love Bell Bottom.” Namrata Shirodkar also sent her best wishes with heart emojis.

Akshay Kumar, on Wednesday, shared his experience of being in London with a post on Instagram. In it, the actor wrote that the lanes of London and the greenery it housed reminded him of his childhood days in Ratlam, Madhya Pradesh. "Just finished my quarantine in London today and stepped out for some fresh air. One look around and I was immediately transported to Ratlam which I remember visiting as a child during my summer vacations. Anywhere I'd see, I could see green ? Missing Ratlam ki galiyaan (lanes of Ratlam)," he wrote, alongside a photo of him on a bicycle.