Bell Bottom Review: The elaborate make-up turns Lara Dutta into a stony, expressionless woman who is neither herself nor Mrs. Gandhi. Adil Hussain, too, has to step out of his comfort zone and play a single-note character. 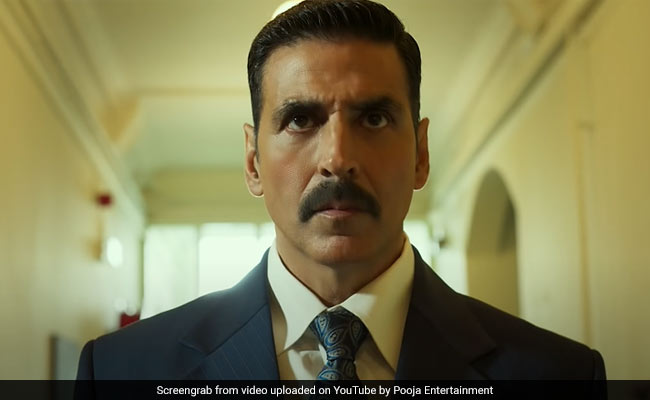 Starring Akshay Kumar as a 1980s Research & Analysis Wing (RAW) agent who leads a covert operation to rescue 210 passengers held hostage on an Indian Airlines plane hijacked by Pakistan-sponsored desperados, Bell Bottom marks Hindi cinema's return to the big screen after a protracted lull necessitated by the second wave of the Coronavirus pandemic. It isn't, however, the big-bang affair one had expected.

The lead actor lends undeniable star power to the film, playing a flamboyant 30-something spy who knows the minds of hijackers like the back of his hand. That is all there is to Bell Bottom. Everything else, including the way the principal character is fleshed out, is pretty pedestrian.

The film's hero is Anshul Malhotra, a secret agent codenamed Bell Bottom and married to an MTNL employee (Vaani Kapoor) who hovers unobtrusively in the background like a good, dutiful, madly in love wife. Every time the secret agent returns home, the lady is at the door to receive him with hugs and pecks on the cheek.

The man's boss Santook (Adil Hussain), too, trusts him with his life. When Pakistan's Inter-Services Intelligence (ISI) masterminds a hijacking with the intention of bargaining for the release of a few Khalistani extremists lodged in Indian jails, he recommends him to Mrs. Indira Gandhi (Lara Dutta hidden behind layers of prosthetics) and asserts that he has the chops to solve the hostage crisis.

The foreign affairs minister (Thalaivasal Vijay), the civil aviation minister (Abhijit Lahiri) and the Intelligence Bureau chief are openly sceptical about the spy who has come in from the cold with a set of ideas that are at variance with theirs. James Bond is indeed invoked in one throwaway line that the hero spouts. Do not let that send your expectations soaring - Bell Bottom has neither a top-draw villain nor an enigmatic, sultry femme fatale to liven up the proceedings.

To be fair, there is an element of intrigue surrounding the characters of Agent Bell Bottom's spouse and the RAW point person in Dubai (played by Huma Qureshi), but it is sprung upon the audience far too late in the film for it to make a meaningful difference. No matter how crusty our intrepid secret agent is, he is a mamma's boy who sheds copious tears when his mother leaves for London to visit her elder son. Tough guys do cry. Unfortunately, his mom (Dolly Ahluwalia), the loquacious object of his filial devotion, gets short shrift.

Scripted by Aseem Arrora and Parveez Sheikh, Bell Bottom dangles midair between an action-packed hostage rescue thriller and an insipid star vehicle designed in a manner that allows the lead actor to completely crush the potential of the narrative material.

The rescue mission, which sees its share of ups and downs, quite literally kicks up a storm in the desert but the film fizzles out well before it has run its course because director Ranjit M. Tewari's approach is way too leaden-footed for an actioner inspired by true events.

The film has a great deal of action all right, but it is terribly low on emotions. This despite the fact that the protagonist is avowedly "personally invested" in the case. He goes out on a limb for mother and motherland (armed primarily with poker-faced pomposity) to teach the hijackers a lesson.

Bell Bottom is essentially a tale of two hijackings separated by five years. The first one, which occurs in 1979 under Morarji Desai's tenure as Prime Minister of India, ends with the loss of a single life. Thereby hangs a tale that explains why Agent Bell Bottom is willing to stake his all. In the second, in 1984, the agent vows to bring the hijackers to book before they can harm any hostage. His is the first RAW operation on foreign soil and is fraught with the risk of jeopardizing relations between two friendly nations.

In one scene, the hero orders a bottle of Coke and demonstrates to his mentor what a covert operation looks like. He pours the soft drink over a serviette shoved into a glass. The paper napkin dissolves. An epiphany? A stroke of genius? A bid to emulate James Bond? It's kindergarten stuff really.

The suave agent also provides detailed dope to Santook on how and why ISI has been spoiling for a fight ever since India dismembered Pakistan by helping Bangladesh become a free nation. The senior RAW operative is all ears despite the fact that he obviously needs no lowdown on anything that is going on out there.

In the real world, Santook would have summarily put Agent Bell Bottom in his place for presuming that he knows more than the man who got him the job. Akshay Kumar is the star here, so the character he plays is allowed to be presumptuous even if that undermines the film.

Bell Bottom is set in a period when, the audience is told, seven Indian planes were hijacked in five years. Prime Minister Indira Gandhi is at her tether's end. She goes into a huddle with her core team. With no solution in sight, negotiations are nixed and a rescue operation is greenlit. Agent Bell Bottom swings into action.

What ensues does not add up to an edge-of-seat drama because even when talk veers around to saving human lives at all costs the screenplay conspires to keep the people who are in the line of the hijackers' fire off the radar. The climax of Bell Bottom does not deliver a nail-biting crescendo. It plays out in a tame, predictable way.

Bollywood, more often not, turns the fictionalization of real-life incidents into outright trivialization. Bell Bottom does no better. It rarely gets off the ground - it limps along listlessly. Neither the dangerous marauders who have taken control of the aircraft nor the harried fliers whose lives are at risk are allowed any space by the screenplay to make an impact.

The focus is squarely on Akshay Kumar playing Akshay Kumar in Bell Bottom and a thick moustache that is supposed to give him a retro look. The film, and all the other actors, suffer in the bargain. The elaborate make-up and the salt-and-pepper hairdo turn Lara Dutta into a stony, expressionless woman who is neither herself nor Mrs. Gandhi.

Adil Hussain, too, has to step out of his comfort zone and play a single-note character. He at least has a few passable one-liners to fall back on. Denzil Smith has nothing. In the guise of R.N Kao, the first chief of RAW, he is a mute hanger-on.

To draw an analogy with the bottle of Coke mentioned earlier, Bell Bottom is a fizzy drink gone flat. Or, to describe it alternatively, it is a film leaves you feeling like a passenger strapped to a seat in an aircraft low on fuel and stranded on a tarmac.