"Being a mom also means being part of naughty but harmless adventures," wrote Twinkle Khanna 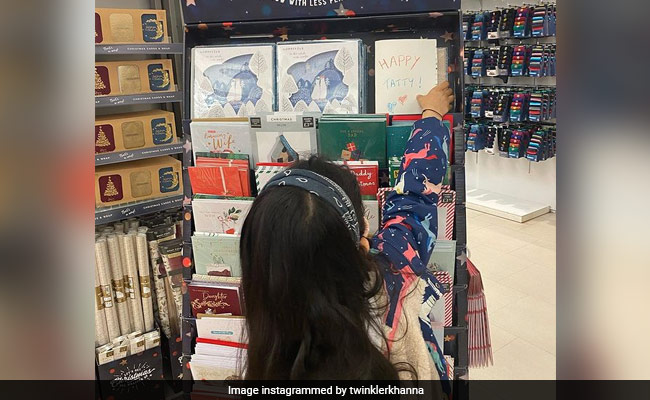 Guess who Twinkle Khanna's partner in crime is? Her eight-year-old daughter Nitara. Twinkle Khanna, in her latest Instagram post, opened up about a prank she pulled off at a departmental store with help from Nitara. Twinkle and Nitara created a one of a kind greeting card (LOL) and couldn't resist placing it in the display section at a store they visited recently. Twinkle opened up about her adventure with Nitara and shared this interesting anecdote: "Clearly there was not a single card that wished anyone 'Happy Tatty' and so we added it to the carousel at a department store. Being a mom also means being part of naughty but harmless adventures. When I am long gone, I am sure she will remember the time when we made this card and despite her misgivings, I egged her on to add it to the store display."

That's such a Twinkle Khanna thing to do!

Twinkle Khanna often shares glimpses of her mom life on Instagram, some of which are also self-directed jokes. Here's when she got a make-over (of sorts) by Nitara: "Another day and another makeover! I am clearly a glutton for punishment. And the little one has no future as a make-up artist!"

Is that Nitara in Twinkle Khanna's post on "The new normal"? "The balcony is becoming a forest and all our kids are turning into masked Superheroes," wrote Twinkle.

Twinkle Khanna and Akshay Kumar are also parents to son Aarav. Twinkle Khanna, a former actress, switched careers to become an author. She has these best-selling books to her credit: Pyjamas Are Forgiving, The Legend Of Lakshmi Prasad and Mrs Funnybones. She currently sports many hats - she's a columnist, an interior designer, a producer and also a Twitter humourist.